Down but not out : Fire victim pushes on after pleas for help fell flat 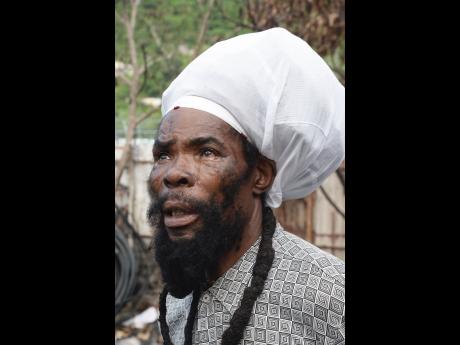 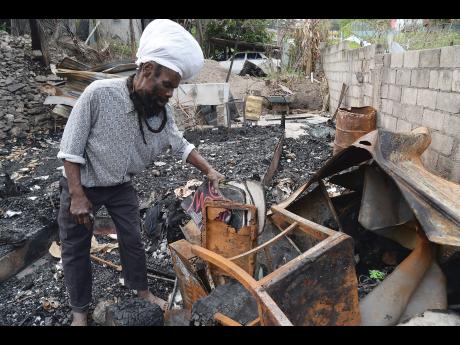 After almost two months of being homeless due to a fire, Osbourne 'Peanut Dread' Ellis said he has grown weary of waiting on handouts are not forthcoming.

Still sleeping under a zinc shed, and down to his last $3,000, Ellis said he plans to use it to restart his peanut vending business. He is uncertain of how far his measly investment will stretch, but said it is a start, until better comes.

"Me a plan fi take back the road before this three grand blow up because nothing not coming in. Is dog eat dog inna the place yah. In Jamaica, nobody don't sorry fi nobody," Ellis, 51, told THE STAR.

He said the situation had stripped him of the will to push on for a while, but he is now determined to get his life back on track. Yesterday, he made the first move by gathering a bundle of fire sticks to roast his peanuts as his stove was destroyed in the fire.

He used to earn a living selling peanuts (in shell, roasted, and raw) and peanut brittles, but had to stop when his Food for the Poor house, which once stood in Golden Avenue, Kingston 7, went up in flames on May 13. THE STAR highlighted his story on May 30, but, so far, Ellis said only two persons have assisted, by sending him US$50 ($J6,400) each from America.

Though thankful for the gesture, Ellis said he is in dire need a greater assistance.

"Is outside me stay under some old zinc wha did burn up inna the fire. I take them and make a little shed, but every weh open right around. This place is very slow. My case is an emergency case, and authorities out there can help and them nah help," he lamented.

"The man wha me usually buy peanut from, him know what a gwaan and him say him will give me a little 10 pounds. That little bit still but me have to try," Ellis continued.

His daughter, who was living with him at the time of the fire, has sought shelter with her family in another parish, but Ellis remains on the charred premises as he said he has nowhere else to go. He has been residing at the address for over 30 years,

By Friday, Ellis said he will be walking along the streets in the Corporate Area trying to make a sale. Meanwhile, he is still appealing for assistance.

"I would like to get even 500 blocks, about 10 bags of cement and some steel to start a little one room. If anybody could assist me that way, I would be very glad. I would work hard," Ellis said.