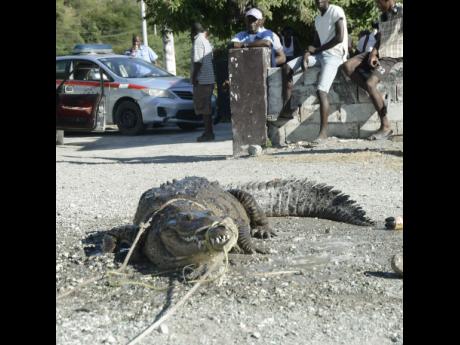 A crocodile that was captured in Grants Pen, St Thomas, earlier this year.

The National Environment and Planning Agency (NEPA) is urging residents of Greater Portmore, St Catherine, to desist from disposing of food items and dead animals in gullies and canals as it will attract crocodiles into the residential areas.

This warning comes after a team of seven from NEPA and the Urban Development Corporation (UDC) had to spring into action on Saturday to capture an 11-foot long male crocodile that was spotted in a canal between Three West and Three East in Greater Portmore.

"The citizens saw it and they made a call to NEPA. One of the officers was immediately contacted, then the collaboration was made with UDC to remove the animal. It was relocated to a safe habitat," Rosemarie Lee, manager of public education and corporate communication at NEPA, told THE STAR.

She added that there have been 11 such instances in the financial year from April 2016 to March 2017, where NEPA and UDC were called to relocate crocodiles that wandered into the community.

"Historically, Portmore was swamp, so, right now, they [crocodiles] travel though the gullies and the canals. So when people dispose of food items and dead animals in the gullies and canals, this will attract them because that's a source of food for them," Lee explained.

In the event that a crocodile is spotted, Lee said residents should contact NEPA immediately, and refrain from interfering with the protected animals.