Mother cares for children from prison 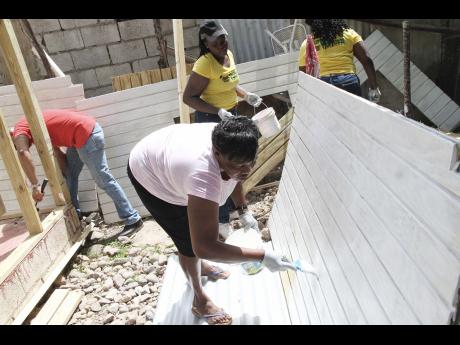 Food for the Poor house beneficiary, Beverly Foote primes a wooden panel that formed one of the walls of her new two bedroom home work in Irish Pen, Spanish Town, St. Catherine on Thursday, July 20. Miss Foote's house was the first of five houses FFP will be able to construct after Supreme Ventures donated $3 million to the charity's home building 5K Run/Walk initiative. 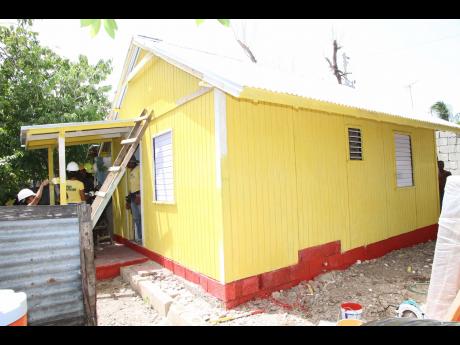 A house as bright and sunny as the future for Food for the Poor house beneficiary, Beverly Foote and her family built by Supreme Ventures in partnership with Food for the Poor in Irish Pen, Spanish Town, St. Catherine on Thursday.
1
2

A woman who applied for a Food For The Poor (FFP) house while she was inmate at the Fort Augusta Adult Correctional Centre was last week presented with the keys to a sunshine-yellow house with white and red trim. The house was built in Irish Pen, Spanish Town, St Catherine.

The woman, Beverly Foote, said that even though she was serving time, she was still responsible for her eight children who lived in the structure that was previously on the land .

"It was a very difficult time for me and my family. I was incarcerated for some years and I left my kids here. When I came back, the place was rotten down and they were still living in there. Their father was here with them, but he never took care of them. I had to get my children into school from prison, send letters to the schools because he was not helping," she said, adding that her family has grown to include 10 grandchildren, with another on the way.

The house, built on July 20, is one of five that Supreme Ventures' $3-million contribution to Food For The Poor for the building of homes for less fortunate Jamaicans.

"Our hearts were so full ... and then got the chance to work on making this project a reality," said Simone Clarke-Cooper of Supreme Ventures Limited.

"I think I can speak for everyone on our team when I say the experience was life-changing. We left feeling fulfilled and blessed to have worked with a fantastic and committed team from Food For The Poor," she added.

Marsha Burrell, development and marketing manager at Food For The Poor Jamaica, said that in addition to the donations, FFP encourages donors to get involved in the actual construction of the homes .

Clarke-Cooper said the handing over of the keys to Foote was a special moment.

"In that moment when I handed over the keys, I got goose bumps when I thought of the significance of what I was about to do, and what SVL had done in this woman's life. When we looked into Miss Bev's eyes and saw what it meant to her, the team was moved beyond words. We came here today and there was nothing. We left Ms Foote moving into a house for her family. There are no words to express how good we feel," she said.

Foote had joined a small contingent of volunteers that spent five hours making the house she intends to transform into a home.