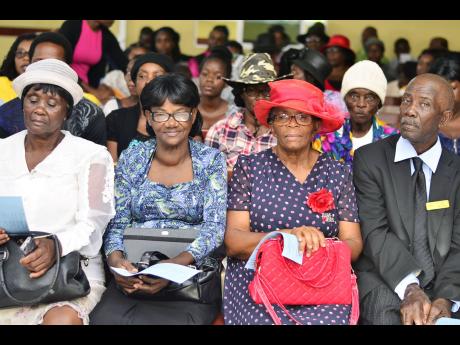 Some of the farmers honoured by their fellow parishioners.

In a gesture, which fitted admirably into the nation's 55th Independence celebrations, a group of respected stakeholders in south Trelawny created and staged an awards ceremony to honour 55 outstanding yam farmers, for their role in helping to feed the nation and for producing food for the export market.

The idea, which was the brainchild of Pastor Jermaine Johnson of the Spring Garden Circuit of Seventh-day Adventist Churches, was roundly endorsed by other prominent stakeholders, to include Falmouth's mayor, Colin Gager, who resides in the area.

"A group of us, including the mayor, decided this would be a wonderful gesture, so we worked together to secure the required sponsorship. We are happy we were able to stage a successful awards function," said Johnson.

The primary source of income for most residents is farming, which includes other produce besides yam.

The area, which once had a prominent annual yam festival, now has a new lease on life with the establishment of a yam house in Wait-a-Bit.

The house functions as a hub for those farmers who are desirous of entering the export market.

Speaking at the awards ceremony, which was recently held at the Warsop Seventh-day Adventist Church, guest speaker Dr Karl Archer, who is a product of south Trelawny, lauded the contribution of the farmers to community development and nation building.

"There are awards ceremonies for other professionals, to include teachers and nurses, among others, so it is about time that we start recognising the contribution of our farmers," said Archer. Dennis Fisher, one the farmers who walked away with an award, was thankful for the recongition.

"This is wonderful, and I must commend those who came up with the idea," said Fisher. "We have never seen so many farmers coming out in their Sunday best for an event where they are the guests of honour."