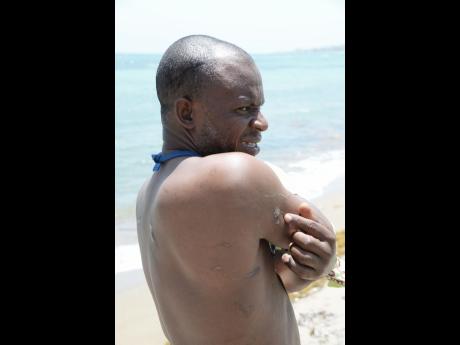 Oral Alexander showing off cuts and bruises on his arm, shoulders and back. 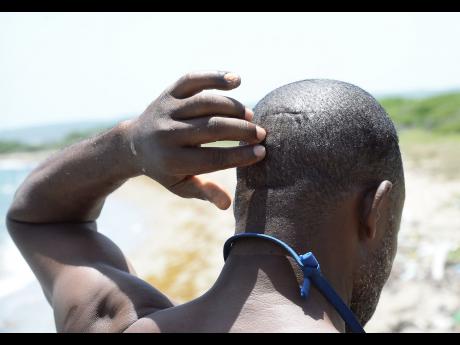 Alexander points to an area in his head where he received a cut during the attack. 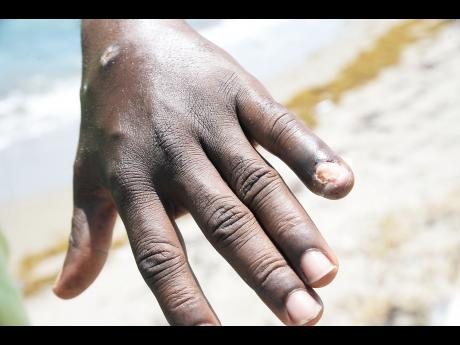 Alexander shows the scars on his hand from the crocodile attack. 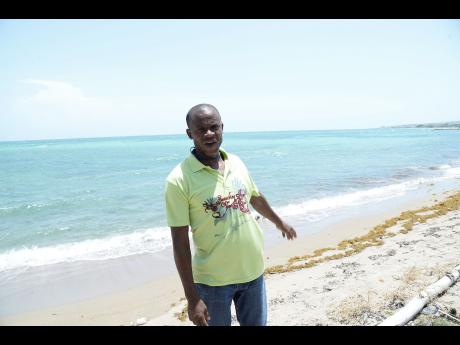 Oral Alexander talks about his crocodile attack in Hellshire on Emancipation Day.
1
2
3
4

Fisherman Oral 'Val' Alexander stood fearlessly along the Old Hellshire Beach in St Catherine yesterday as he recounted his encounter with a 12-foot 300-pound crocodile in the same water body on the night of August 1.

Nearly a dozen scars were still visible as he pointed to the spot the incident unfolded.

"Me and two of me bredrin them go dive out there, so I shoot a fish, then I turned off me light and put the fish in my bag. When I turned on back my light, I saw a piece of thing looking like a log just about two inches from my head, but when I looked closer, I realised it was a crocodile!" the fisherman for more than 30 years told THE STAR.

Despite being in such close proximity to the beast, Alexander's years of experience taught him to remain calm.

He said he used his flashlight to gently nudge the reptile on its nose to move it out of the way, but the crocodile grabbed on to his hand.

"Normally, them jawbone is like 2,500 pounds of pressure, but him didn't put that amount of pressure on my hand, so I was looking on him and watching my hand inside his mouth. I just got me gun and hit him on his teeth and him open him mouth, so I just pulled me hand outa him mouth. Then me realise me hand was bleeding real bad," he explained.

Things quickly escalated when the 47-year-old Portmore resident tried to swim away. The crocodile's claw scraped his back and got entangled in his fish bag.

The animal then wrapped around Alexander and pulled him underwater.

"My bredrin realise what was going on now, but him so frighten him stand up pon the stone. Me try come up to the surface three times, but the crocodile pull me back down. Some other fisherfolk was across from where we were, so them say: 'You nuh see say the crocodile a go kill unuh, bredrin'!" Alexander said.

After realising no assistance was forthcoming, he said he shot the animal in its belly with his fish gun, and it released him.

But the saga was not done yet, as the reptile grabbed his head, flipped him over and pulled him to the bottom of the water.

He received two punctures in his left hand from the crocodile's teeth, four claw marks in his head, ranging from two to six inches long, a deep wound in his side, and two scrapes on his hand.

Originally deadlocked, he had to trim for medics to tend to the wounds.

But this is not his first encounter with wild beasts. He said in 1998, a bull shark attacked him in the same waters and bit out a piece of flesh from his knee.

Nonetheless, Alexander, a father of eight, said he would never give up his livelihood because he dislikes working for people.

He has not gone in the water since the attack because the wounds have not fully healed, but he said he plans to dive again as soon as next month end.