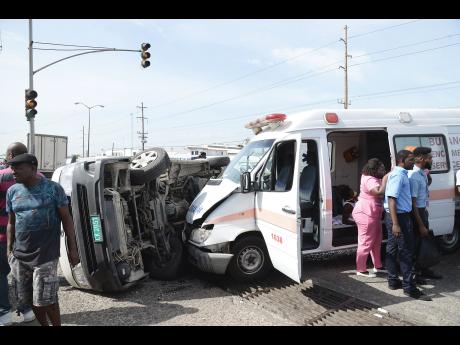 This ambulance crashed into a Hiace minibus along Spanish Town Road after it was negotiating to go through a redlight at the intersection of Chesterfield Drive and Waterhouse Drive yesterday.

Road safety officials are moving to clamp down on the issue of persons dancing and hanging from moving buses. Another video has emerged of a man engaging in the act, and taking it to another level by climbing on top of the moving vehicle during his daring routine.

Head of the police's Traffic Division, Senior Superintendent Calvin Allen, said that in addition to prosecuting persons for the on-spot violations, they intend to make recommendations for the Transport Authority to revoke or suspend the road licences of such operators.

"We are also compiling a list, sending forward to the Transport Authority, recommending that they seriously look at the revocation or the suspension of the road licences of these operators until they realise the awesome responsibility they have towards greater order and safety on the roadways," Allen said.

Dr Lucien Jones, vice-chairman of the National Road Safety Council (NRSC), told THE STAR that the issue has become a worrying trend.

"This is just madness at the highest order. It is a very worrying trend that the society has to begin to grapple with, as to how do you get it into the minds of these young people that this is not fun. This is dangerous business and many people are going to die if you continue to behave like that," he said.

The video now in question began circulating on the weekend, and comes some two weeks after another video made headlines for a similar act.

The clip shows a packed minibus driving along the road, with Alkaline's Impact blaring from speakers. A man, who is said to be a conductor, is seen swinging from the side of the bus while jamming to the song, much to the delight of some passengers.

He then climbs atop the moving bus to join another man who was kneeling on top of the vehicle. The video ends as the bus slows down, and the man descends from the bus top.

According to Jones, it is the NRSC's mandate to coordinate activities to reduce road crash injuries and to engage in public education, as well as getting the police to enforce the law.

However, he said there is simply not enough police to man the indiscipline on all buses. So, he is calling on the bus drivers and the public in general to play a role in curtailing these acts.

Meanwhile, Allen said his division is making progress with the investigation involving the conductor, who was dancing to Aidonia's Yeah Yeah some two weeks ago.