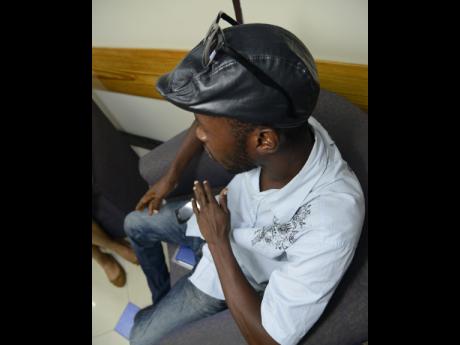 Lascelles Reid, an ex-con who is trying to turn his life around.

At 18 years old, Lascelles Reid was convicted of gun crimes he said he had not committed, and was sentenced to nine years in prison.

Though still livid about what he claims was an unwarranted pitfall in his life, the now 35-year-old Reid said he was determined to carve out a bright future for himself, and is imploring other youngsters not to make the same mistake he did.

"Stay far from bad company because it a go lead you astray," he warned.

Reid explained that in 2000, a friend from his community in Old Harbour, St Catherine, shot up a man, and his name was called as one of the culprits.

"I was convicted of shooting with intent, illegal possession of firearm crimes I did not commit. My name just get called on it because me a par with the youth. After hours, probably him go do him things. Me neva know about it because me deh a mi bed the night. Me only hear seh me shoot up man. And the man come a court come seh a me and my friend shoot him up," Reid recalled.

He was convicted on November 27, 2001, and sent to the Tower Street Adult Correctional Facility. He said his first thought was whether he would make it out alive.

"A the most wickedest ting me can think of. You haffi skill fi survive. The least little thing can cost you your life. You just can look pon somebody, and it cost yuh life. The prison divided into sections, and you have man warring from different sections," Reid continued.

Determined not to dig himself deeper into trouble, Reid said he went to school in prison to keep himself occupied, and he eventually learnt to read and write.

"So me start teach the guys inna mi cell. Mi get some chalk from the school and get some book from the library, and start teach dem," Reid said, smiling.

He was released from prison after serving six years and eight months because he was a first-time offender. He said it has been a rocky road since then. However, he gave his life to the Lord, and is trying to stay on the right path.

He eventually landed a short-term job at a small construction company owned by a policeman. There, he said he learnt how to make decorative fixtures, such as columns. He currently does not have a steady home and survives by doing odd jobs in his community, but his dream is to start his own construction business, making decorative fixtures for homes and offices.

He said he would greatly appreciate a place to live and donations of materials to start his business.

Those wishing to assist may contact Lascelles Reid at