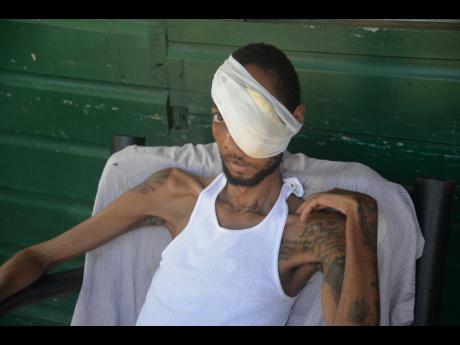 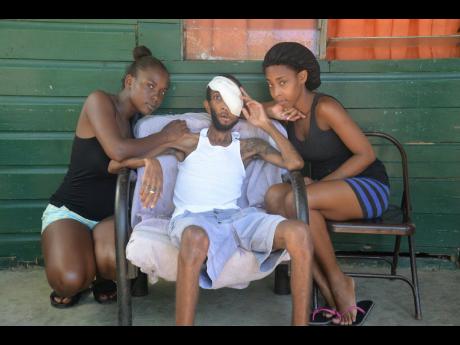 Jermaine Barrett flanked by his sisters Chantel Dias (left) and Shanice Dias at their home in Mt Salem, St James.
1
2

Despite the immense pain associated with his cancerous tumour, and the fact that doctors have said they can do no more for him, Jermaine Barrett is still hanging on nearly a month after he was sent home from hospital.

He even managed to visit church briefly last Sunday.

“He went to church Sunday morning and spent about 10 minutes there but he is very weak so we had to get drive to pick him up. He spends most of his days in bed sleeping and he doesn’t talk much so I don’t know what he is thinking sometimes,” his mother, Jean Carroll told THE WEEKEND STAR.

The Mount Salem, St James family said it is a constant struggle to care for him and they are imploring on the public to assist in whatever way possible.

“He is in a lot of pain but the medication he is taking doesn’t help him anymore. We have no money and he needs help and support. If we can get some money, food stuff, bandages, anything, would be greatly appreciated,” Carroll said.

She explained that they have to change his bandages three times daily because he constantly bleeds and secretes other fluids from the eye that he lost to the tumour.

In addition, the 28-year-old Barrett is on a special diet which consists of plenty of juices, as well as soft foods such as bananas and sweet potatoes, because he lost most of his teeth to the tumour.

Carroll told THE WEEKEND STAR that it pains her heart to see her only son in this condition, but she is doing her best to care for him with the little that she makes from selling outside a school gate.

Barrett returned to Jamaica on August 18, after spending a year at a medical facility in New York where he underwent eight surgeries.

He was first featured in THE STAR in April 2016, when he was pleading for help to go overseas to treat his condition.

The story created waves across the island and even got the attention of Prime Minister Andrew Holness, who made a commitment to assist him to get treatment overseas.

Barrett’s family is again appealing for assistance, as they try to make his life even a little more comfortable.