STAR Salute : Gloria bonding with her flowers in retirement 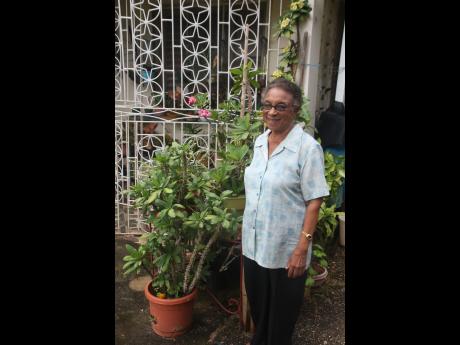 Gloria Carruthers at her home in Jackson Town, Trelawny.

Despite originating from Clarendon, Gloria Carruthers has become a household name in Jackson Town, the quiet community located in Trelawny's sugar belt where she chose to settle and make here home more than four decades ago.

Before settling in Trelawny, Carruthers lived a somewhat nomadic life. Her father, a renowned Baptist pastor, was constantly on the move, regularly changing addresses between Clarendon, St Mary and Trelawny.

When her dad took charge of the William Knibb Baptist Church in Falmouth, in the 1960s, Carruthers became a student at the Westwood High School, the much-respected all-girls' school located in Stewart Town, a community that shares borders with Jackson Town.

In 1965, when Church Teachers' College in Manchester opened its doors for the first time, Carruthers was among a small group of girls from Westwood who successfully completed the entrance examination and became students.

"Seven girls from Westwood went for the entrance exam and interview," said Carruthers. "Five of us were accepted ... That is how my teaching career, which took me back to Westwood, started," she said.

"I taught in many parishes before settling at Westwood, where I taught history, English (language) and English literature," said Carruthers.

The former teacher, who steadily rose through the ranks at Westwood to become a vice-principal before she retired, offered boarding to students at her home, which was greatly appreciated by the many parents who knew that with her, their children would be in safe hands.

"It was natural for me to satisfy this need, so I equipped my home to provide boarding accommodation," said Carruthers.

She is now enjoying her retirement, and is a devoted church member and highly respected member of the Jackson Town community. She spends time tending to her garden, where she has developed an intimate bond with her plants.

"I talk to them and they respond with lovely colours in their blooms," quipped Carruthers.