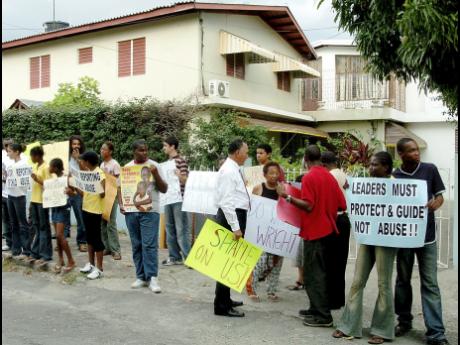 Protestors demonstrated outside the Dayton Avenue Church of God, in St Andrew in 2006 when the human trafficking story against Donovan 'Uncle Jimmy' Jones surfaced.

Donovan Jones, the deacon who was charged with human trafficking after it was alleged he enabled three teenage boys to sexually assault a teenage girl, has died.

The man, known by the nickname 'Uncle Jimmy', was on trial for an incident, which occurred in 2006 when Jones was present in a motor car where a girl was fondled and the act was video recorded.

Uncle Jimmy's death is the second one connected to this matter as the then pastor of the Dayton Avenue Church of God, retired Appeal Court judge Martin Wright, also passed away.

The three male teenagers who were charged along with Jones had pleaded guilty to the charge of indecent assault in 2010.

Two of them were placed on probation, while the third was admonished and discharged.

The court case had suffered several delays due to the unavailability of witnesses.

In 2011, The director of public prosecutions (DPP) had entered a conditional nolle prosequi (no prosecution) because of the unavailability of the complainant, as, at the time, she was overseas.

Since then, the 'Uncle Jimmy case' had been waiting for the matter to be called up again.