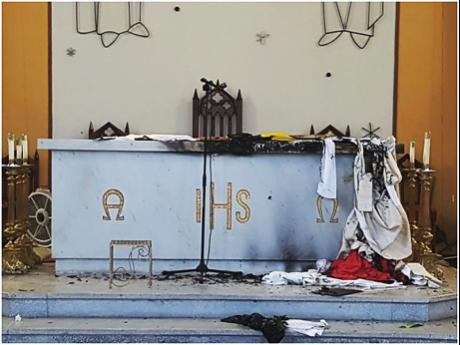 The altar at the Sts Peter and Paul Catholic church after the arson attack. 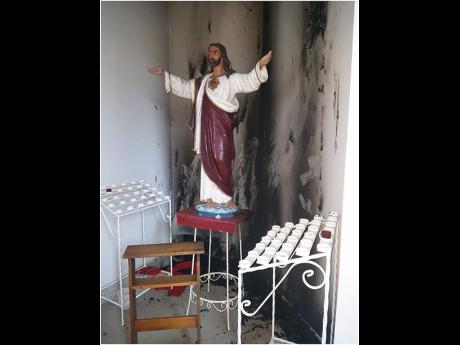 Burnt walls at the front of Sts Peter and Paul Catholic Church that was set on fire last year.
1
2

The Sts Peter and Paul Catholic Church in St Andrew has suffered two arson attacks in one year, and other churches across the island have been robbed and vandalised.

Persons often wonder what types of persons would commit these acts, which are often seen as irreverent or sacrilegious.

Psychiatrist Dr Jeremy Allen told THE STAR that, from his assessment, persons who commit these acts are detached from the society.

He said some of these persons lack appropriate social and spiritual influences which would have taught them to respect the church as a religious entity.

Allen said that the church has been removed as a primary and integral agent of socialisation.

“In the past, the church was an institution, [and] would be a primary organiser of events that would both build a community and foster a relationship between the residents and the church. The church does not have this connection anymore,” he said.

One Catholic priest, Father Carl Clarke, told THE STAR that his church has not been vandalised, but he agrees that there this a disconnect between the church and the community. He, however, said that this disconnect stems from people moving away from the church.

“Persons have taken a non-committal position towards the church. You hear more persons saying that they are spiritual but not religious,” Clarke said.

He added that there is a difference in the upbringing of teens today and those of say 20 or 30 years ago, when the church was a place where teens could socialise in a safe environment.

“The world has become more secularised. While they are becoming more educated, information is being used to challenge the teachings of the bible," he said.

Clarke said that the church is not the only social group which has suffered from this disconnect, as families have also been impacted.

“Persons living the same house communicate using WhatsApp. Parents are talking to their children and they’re sending a text,” he said.