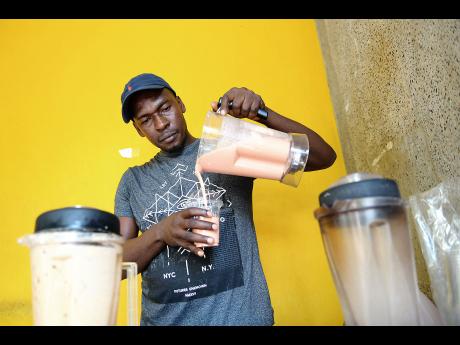 One smoothie please! Barracks pours a freshly made smoothie into a cup for a waiting customer. 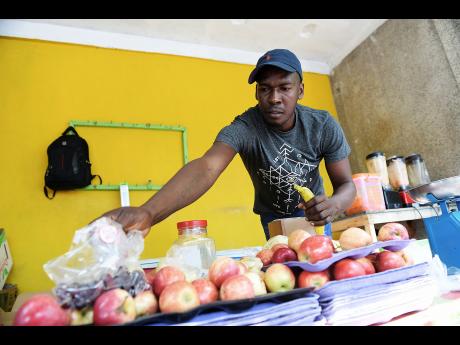 Damion Barracks selects some fruits as he prepares to make another smoothie. 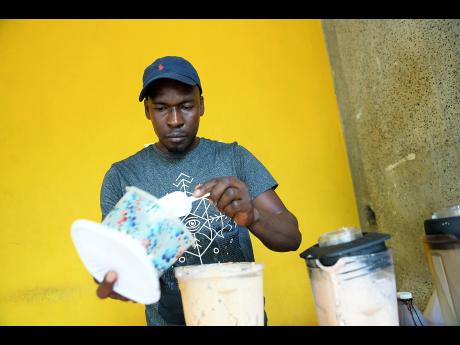 Damian Barracks adds a little 'tuups' of milk powder to one of his smoothies.
1
2
3

What started as an idea from a friend has turned into a successful business venture for Damion Barracks.

Barracks runs a small smoothie and fresh fruit stall at the corner of Duke and Barry streets in downtown Kingston.

With no formal training, Barracks said that he gradually learnt how to perfect the smoothies and over time, grew his business.

"A friend of mine go to the country and see it and tell me bout it ... a doah know how, but a just start it and jus ketch on," he told THE STAR.

A small section in the wall along the busy Duke Street is where Barracks and his friend set up a display table for the fruits.

Another table holds three blenders to make the smoothies.

A small generator which powers this operation is nestled comfortably between two columns along the wall, and allows for smooth traffic along the sidewalk.

"I get out here from about six every morning and come off about six in evening," he said.

Barracks said that the business not only provides financial support for himself and his family but also the workers who help him with his business.

When it comes to the smoothies, Barracks said that the 'Magnum Punch' is the most popular one. It consists of peanut, oats, banana, papaya, and molasses.

Another one of his signature blends is the 'Fruit Medley', made from pineapple, banana, melon and papaya.

Given the demand and in an effort to save customers undue waiting time, Barracks said that when the rush is not heavy, he pre-blends some of the smoothies and put them on ice.

"We have the pre-mix put down cause some people come and dem cyaan wait, while some people can wait so we just build dem," he said.

Barracks said that his busiest times are in the mornings and lunch hour, with most of his customers being persons who work nearby or passers-by.