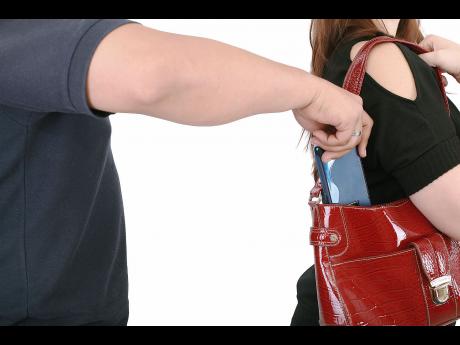 A St James man, who reportedly robbed a woman of her cell phone, was remanded in police custody following his appearance in the St James Parish Court last Wednesday.

Demar Tennant is charged with larceny from the person.

The allegations are that on April 21, the complainant was at a taxi stand on Creek Street in Montego Bay, when she took out her cell phone to make a call.

Tennant allegedly approached the woman and grabbed her phone and ran.

It is further alleged that Tennant was caught by the police the following day and taken into custody for a similar offence.

When he was searched, the police found a memory card with information on it. The complainant was subsequently contacted and she identified the memory card as hers, following which Tennant was charged.

"I am instructed by him that the same pants he was found in, he is wearing them now and there is no front pocket on it," said Butler.

"Here's the problem you have, the allegations arise from a set of circumstances that suggest a certain pattern," Wong-Small replied.

The court was also told that Tennant could relocate to Siloah, St Elizabeth, if he should be offered bail. However, Wong-Small ordered that the defendant be remanded and contact made with his relatives.

He was remanded until June 14.