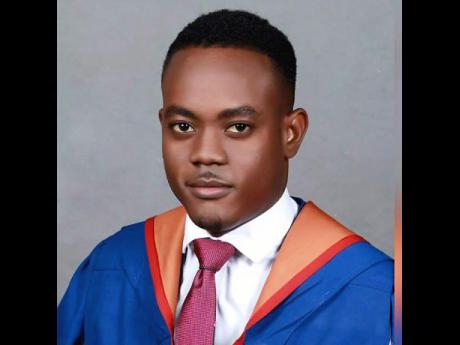 Jou'Vaughn Reid, 24, fell ill shortly after his mother passed away on April 15, now he is faced with another health battle.

Reid told THE STAR, "My white blood cell count was high and I wasn't breathing so well. They worked on that and I was discharged. One night I had a serious headache and I called my brother and told him that I wasn't breathing so well and he panicked. I vomited that same night and they took me back to the hospital. At the hospital it was discovered that there was a bleeding in my head, one of my blood vessels burst and led to me having a stroke."

Reid had to undergo a series of MRI and CT scans.

The results were sent overseas and he was diagnosed with Arteriosvenous Malformation of the brain which required Gamma Knife Radiosurgery.

The procedure is a very precise form of radiation therapy that focuses intense beams of gamma rays with pinpoint accuracy to treat lesions in the brain.

Having spent close two months in the intensive care unit at the University Hospital of the West Indies, he was referred to the care of Dr Aizik Wolf in Florida.

In order to lead a full life once again, Reid, who has been confined to his home because of his sickness, will have to travel to the Miami Neuroscience Center in Florida as the required procedure is not available in Jamaica.

Reid has had to relearn how to walk, strengthen basic motor skills and regain control of his bodily functions.

Reid said his condition is rare, but because he also suffers from sickle cell, doctors would rather not cut him.

"Even though it says gamma knife it's radio surgery so I would not be cut. What is gonna happen is that they would put a head plate on me and shine some form of light in my head and the radiation ray will close the malformed veins," he said.

The surgery costs US$22,000 or more than J$3 million for which full payment is required by October 5.

The surgery is scheduled to take place on October 20.

As a Kingston College old boy, Reid says he lives by the school's motto, 'The brave may fall but never yield'. He is imploring readers to help his cause.

He told our news team, "I regard this challenge as another fight that I will overcome with your support."

A GoFundMe account 'Urgent Brain Surgery (Gamma Knife)' has also been created to aid the cause. Up to yesterday US$5,100 was raised by 129 people.

Donations can be made via cheque or wire transfer directly to the Miami Neuroscience Center at the First National Bank of South Miami, 5750 Sunset Drive, South Miami, Florida 33143, account number 101904121 (c/o Jou'Vaughn Reid).

Financial support can also be given via cheque made payable to Jou'Vaughn Reid or bank transfer to any of the following accounts;