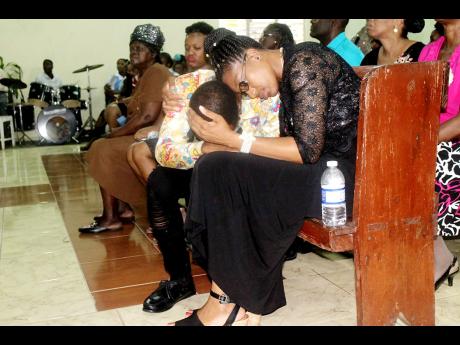 Evangelist Rosetta Campbell, aunt of the deceased, comforts another relative. 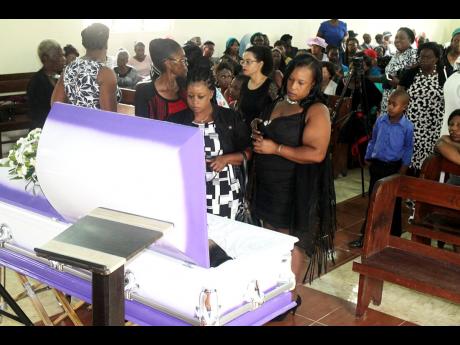 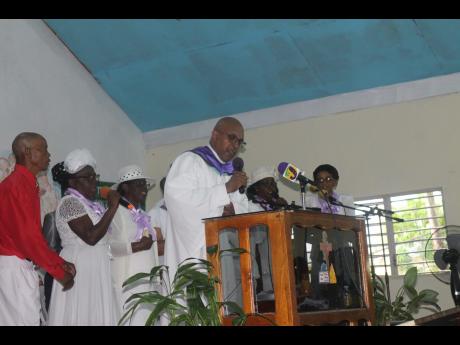 The family members of 25-year-old Khyhymn Campbell, who was found dead in an igloo in a motor car along Marshall's Pen main road by police on August 28, laid her to rest after a very emotional service with much uncertainty and many unanswered questions.

During the service at the True Vine Ministries on Sunday, Khyhymn's father, Dr Bishop Amos Campbell, commended the police, particularly the Superintendent of Police Wayne Cameron for being understanding, and the police personnel who found his daughter.

However, he believes that much more could have been done and still can be done.

Campbell said that the Government needs to increase the training time police officers and place more emphasis on their professional and personal development, as the investigations surrounding his daughter's death has been extremely warped.

"Six months may not be adequate. Though the police are doing a good job, I must recommend, there is room for improvement. My reason for this is the frustration of my family. This man (54-year-old Linton Stephenson) that allegedly killed my daughter had actually threatened other persons and should be in prison from August 16. My daughter was killed on August 28. This man wasn't in the bushes hiding, he was walking around town. Not only that, I understand this man used to drive a red plate taxi," he said.

Campbell also questioned why the suspect, who was on parole was not being properly supervised.

"Do we have any checks and balances in this country to save the lives of innocent people? This man killed his wife, and he went to prison and spent time because he was unfit to plea. How could he be fit to operate a red plate taxi? I can't keep silent; I have to speak out," he said.

Campbell added that the house where his daughter was allegedly killed was not under proper police surveillance.

"There was a body [of Stephenson] in the house decomposed, and the police did not find it. It was flies that found the body, which means the house was not under surveillance. One day after we heard where he was staying in Junction, the news came that he had committed suicide by drinking a poisonous substance, body decomposed, [and] he was dead for two days," Campbell said.

"One funeral home was asked to take up the body and when they saw it, they refused. The face was covered with flies and maggots possessed the body. The man had a huge scar in his face, and when I asked if the scar was recognised, the answer was no..."

Campbell said that he was told that a woman from the downstairs of the house identified the body by the feet, citing that the deceased would always hang hs feet from the veranda, and it matched those on the body found.

"That is not enough for me. This man could be at large," he said.

The police have reported that the post-mortem done on Stephenson returned inconclusive.