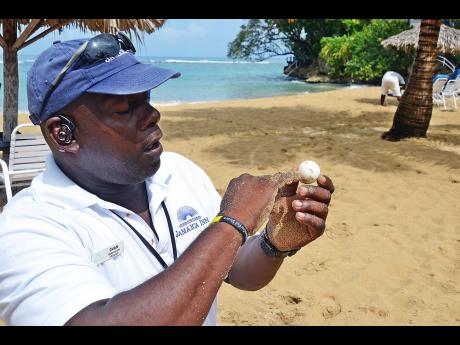 Coombs makes a point about a turtle egg. 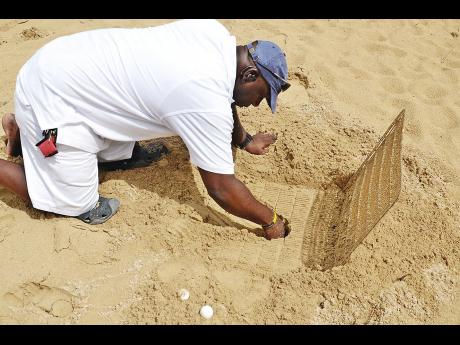 Coombs removes eggs from a nest in the sand. 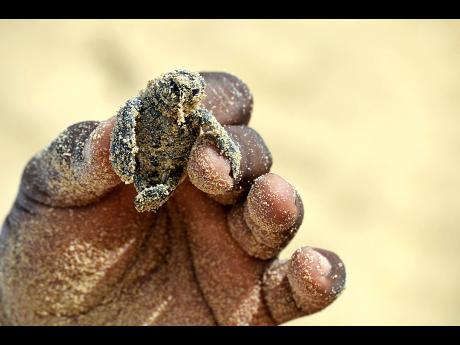 The hawksbill sea turtle is an endangered sea turtle, but if the actions of Ovan Coombs, licensed game warden and water sports manager at Jamaica Inn in Ocho Rios, are anything to go by, then the creatures are in safe hand.

Since taking the job of water sports manager in 2016 at the hotel and having accepted an invitation to become a turtle whisperer, Coombs has monitored the laying, nesting, hatching and release of thousands of baby turtles that have hatched on the resort’s beach.

Coombs credits his 'teacher, Mel Tennant, who is described as Jamaica’s protector of sea turtles, for his getting involved in this activity.

The laying season for turtles, which typically runs from May to October, has seen 4,254 baby turtles being guarded and released safely from the beach at Jamaica Inn into the ocean so far this season.

“From time to time turtles would come up, and I would be notified by my water sports team,” he said. “I would come in the morning, locate the nest and find out where the eggs are. I would do an opening of the nest and make sure the eggs are at least a foot beneath the surface of the sand and also it’s not in a water prone area.

At 52 days Coombs returns to look at the progress that the eggs have made, and from there he can safely predict if the baby turtles would be hatched in two, three days or more days.

The number of baby turtles each season is noted, and that information is then sent to National Environmental and Planning Agency (NEPA).

“The turtle will come back to the beach it was born on to lay,” Coombs revealed. “If it’s a male it will spend its entire life at sea, which can be over a hundred years. The female will come back in around 12 to 15 years to lay a nest. The younger turtles will lay around four nests in one season, each nest will contain 120 to 140 eggs. The older the turtle gets, say over 50, going 75 to 80 years, it will lay seven nests in one season, with each nest consisting of 220 to 260 eggs.”

At Jamaica Inn, guests are invited to watch the turtles while they hatch, and they even get to hold the baby turtles

“It’s a win-win-win situation,” said Coombs. “The guests win as they get bragging rights, the turtles win because no crab will be able to grab them or birds swoop and get them and the hotel wins because other people will see this and want to come and have the same experience.”