CENTRAL STAR: The Miller twins are identical, but different 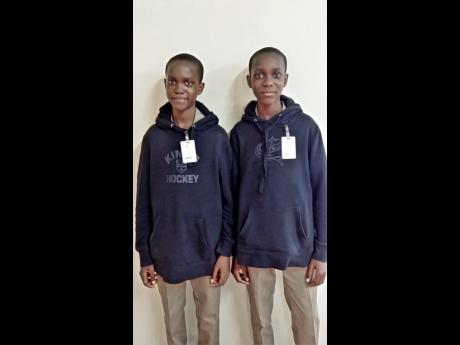 Tyrique and Tyries Miller are identical twins. They were born on August 19, 2006.

Tyrique boasted that he is the older of the two because he was the first out the womb. He shared that Tyries arrived two minutes later.

The two grade seven students at Spalding High are sons to Veronica Chambers and Michael Miller of Cobbla in Manchester.

Tyrique believes it is always a good thing to have a twin brother because persons won't not know which of them did something wrong.

"I hate being a twin, because sometimes persons keep coming to me asking if I am Tyrique, or they would ask me questions thinking that I am him. It can be confusing at times so I do not like it," he said.

The boys admitted that they were never always in the same class at school unlike some other identical twins.

Tyrique pointed out that it would have been a great idea to be in the same class with Tyries, simply because when some of his classmates pick on him, he would have the protection of his brother.

To that reasoning, Tyries agreed.

Plan for the future

The Miller twins made it clear that they have already decided on their future professions.

"I want to be a lawyer, so that in case any member of my family gets in trouble I can represent them," said Tyries.

Tyrique shared that he wants to become a

pharmacist so that he can be in a position to help sick children with medication, as well as to help the elderly whenever they, too, are sick.

The boys were quick to dismiss the myth that if one gets ill, the other will soon after. They said that has never been the case with them.

Although they are identical twins, they say they do not do many things together. They also noted that unlike other identical twins who are always close, they love their own space.

However, they shared that they both love to read, and they like eating shrimp and fish.