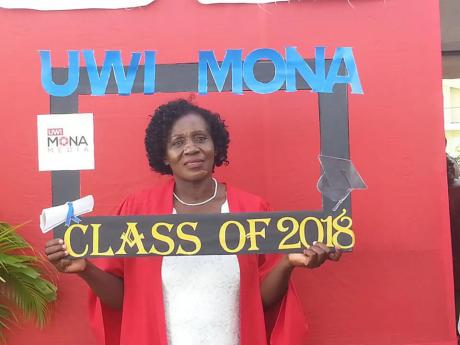 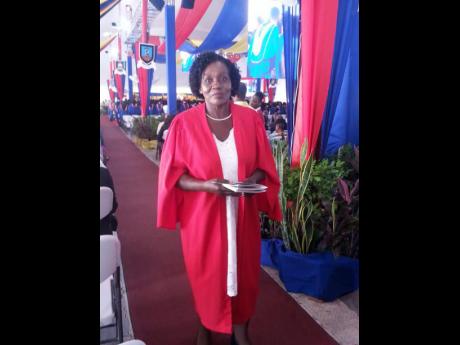 At 59, most persons would be making plans to retire, but after attaining an associate degree in social work, Margaret Edwards is brimming with confidence that she is one step closer to her goal of operating a child care facility.

"I have a passion for helping people in my community and have a remedial centre so that I can help needy people and children to read and write," she told CENTRAL STAR.

Edwards' journey to her associate degree was not an easy one. Before she embarked on her tertiary studies, the mother of two sold fry fish, bread and juices in May Pen, Clarendon.

"I walked all over May Pen Town, in the hot sun. It wasn't easy for me, the box was heavy and I had to walk through the town with it," she said.

"Sometimes the profit isn't much, but I still persisted to carry on to make ends meet, and from that I would send my kids to school, buy the food, pay bills and so on," she added.

After selling in the May Pen market for 10 years, Edwards decided that she needed a change of career. She enrolled at HEART Trust, where she received certification in early childhood education.

"After that I taught at a basic school for a short while, and then after that I got a job as a caregiver at a child home," she explained.

And it was while working as a caregiver Edwards said she realised that she had a passion for helping children to the point where she wanted to learn more about human behaviour.

With a desire to become formally trained in how to deal with other individuals, Edwards enrolled at the University of the West Indies Open Campus in Denbeigh in 2011.

But while attending the institution, she struggled financially and would have to sit out some semesters.

"It would last three years, but because of financial problems, I had to sit out a semester sometimes because I didn't have the money," she said.

Edwards said that she also struggled initially because she did not own a computer, nor did she know how to use one. She faced the obstacles head-on, and despite her struggles, Edwards was determine to complete her studies. Seven years after she started, she graduated with an associate degree earlier this month.

"At no point I ever thought of giving up because I am a person like this; I believe in hard work and determination, and once I am going for a goal, nobody can tell me that I can't get it. I always try to reach higher at all times," she told CENTRAL STAR.

Sheika Henry, one of her two children, said on Facebook that "If there is anyone who is struggling to achieve their goals, this is proof that you should never give up, no matter the circumstances."