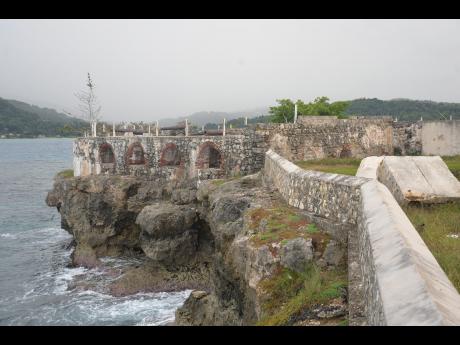 Fort Charlotte, located in Lucea, Hanover, was built in the mid 18th century by the British.

Norris Hawthorne, the president of the Lucea Development Initiative, wants the State to move with greater speed and purpose in the planned rehabilitation of Fort Charlotte, a tourism attraction in Lucea, Hanover.

"At the moment I am a very disappointed person, because it is about three years since I have been having talks with the Tourism Enhancement Fund (TEF) and the Tourism Product Development Company (TPDCO). We went to a retreat, made a presentation to which they love and appreciate, and still nothing," said Hawthorne.

"They [TEF] came to Hanover at a meeting at the municipal corporation almost two years ago, where they promised the funding, but nothing has happened since."

Fort Charlotte, built in the mid-18th century by the British for the defence of the north-north-west section of the island, is one of eight Declared Sites and Monuments cites on the Jamaica National Heritage Trust list in the parish.

Sheridan Samuels, mayor of Lucea, said there are plans in place to develop Fort Charlotte, adding that a meeting involving TPDCO and the TEF, which focused on Fort Charlotte and other historic sites, took place two weeks ago. He said that there was even a tour of the facility.

"So in terms of Fort Charlotte, we have gone somewhere and we have it under the Jamaica National Heritage Trust," the mayor said.

Howeverm that is little comfort to Hawthorne.

"They are always touring, that is not new. I have been on six tours already at Forte Charlotte that nothing has happened. So they can't keep fooling us with these tours. We are sick and tired of tours without any action," Hawthorne said.

"We need action. We have this gem of a place that is languishing for want of someone to put in some major investment. We, the people of Lucea and the wider parish of Hanover, have all the ideas - It's time for them to do something," Hawthorne added.

Fort Charlotte is part of Rusea's High School. It has 23 openings in its wall, an artillery store that still stands, and barracks that can house up to 50 people. Fort Charlotte also offers breathtaking views of the ocean.