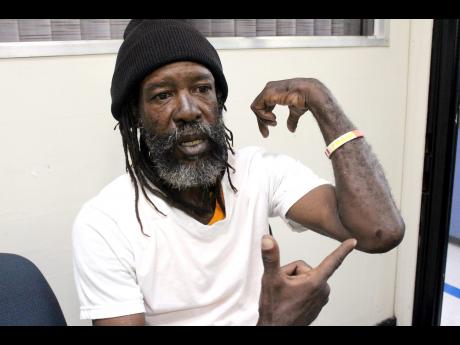 Peter Wilmot shows one of the bruises he received during the ordeal. 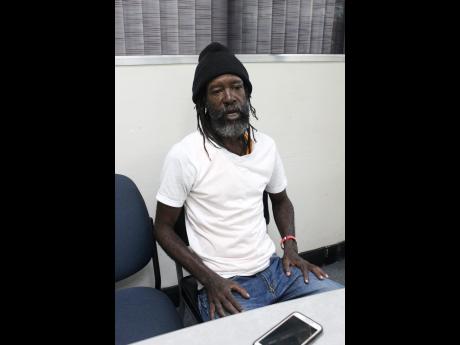 Peter Wilmot claims he was abused by members of the security forces.
1
2

When Peter Wilmot visited THE STAR yesterday, his frustration was evident. The irate Rastaman said that he is now fearing for his life, following a series of attacks from members of the security forces since last Thursday.

The 58-year-old man, who lives in an abandoned property metres from the Supreme Court building in downtown Kingston, said he was viciously beaten recently, and accused of selling cocaine.

"Mi live in that building from 2005 and no one never harass mi yet. Now, as it touch 2018 November, the police and soldier come here a ask mi bout coke and who mi a sell it fah and weh it deh. Dem dig and search down the whole place and nuh find no coke," he said, noting that he moved into the building after his home burned to the ground.

Showing the bruises and what appear to be burn marks on his arms, Wilmot gave details of the incidents which started in the wee hours of Thursday morning.

"No matter how dem beat mi, mi keep on a tell dem say Mr Police and Mr Solider, all if unuh kill mi, a Peter mi name and mi don't sell or take coke. A ganja alone mi smoke. After them come Thursday and Friday, them never return until Sunday night," he added.

Wilmot said that when they returned to his dwelling on Sunday, their actions were even more hostile as they ordered him into a barrel that contains garbage as a mean of intimidating him.

"The man dem put mi down inna plastic barrel with some rubbish inna it and start beat it with them gun. The only reason why when dem light the barrel mi never catch a fire is because dem did wet mi up with water before," Wilmot told THE STAR.

He also accused the members of security forces of stealing his money.

"Friday night mi have the one $3,000 weh mi get from washing car the entire week, and mi watch a solider pocket it. A likkle man on the building have a shop and them take weh him tings and start share it up," he said.

Reflecting on the ordeal, Wilmot said he is living in fear and he doesn't understand why he is being targeted. He stated that he imploring the relevant authorities to investigate the matter before he becomes a tragedy.

THE STAR tried without success to speak with head of the Kingston Central Police Division, Superintendent Robert Gordon. However, up to press time, repeated calls to his cell phone rang without answer.