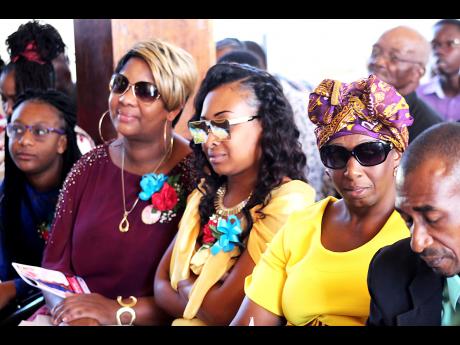 Family members of Barbara Hamilton Spence in the front row of William Knibb Baptist Church in Falmouth, Trelawny, to pay their final respects on Saturday, November 24. 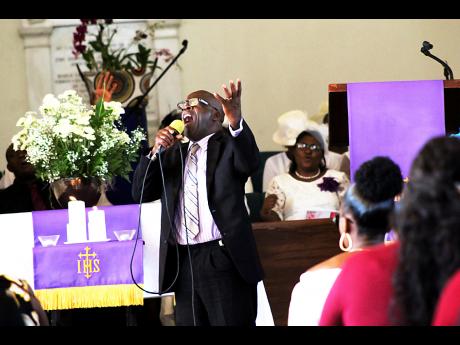 The Reverend Carlton Lynch singing his heart out at the funeral service for Barbara Spence.
1
2

Any stranger travelling to Bounty Hall, Trelawny, could be forgiven to believe that Barbara Hamilton Spence was a member of every church and community organisation. Barbara 'Babs' Spence was born in Bounty Hall on March 4, 1960. She died on October 26, 2018.

Her thanksgiving service, held at the William Knibb Baptist Church in Falmouth on Saturday, November 24, brought out a wide cross section of persons from across the parish.

Linton Brady, a former president of Harmony Football Club, said, "Babs served in every area, except playing. She washed the jerseys, arranged transportation, organised fundraising activities, and made sure we all respected time.

"If you were late, Babs was going to give you a piece of her mind. We were nervous when facing her if we were late. The mould from which she was made has been destroyed. You won't find another like her," he said.

"She was a Christian who was fashionable, but not materialistic. She leaves behind a legacy of integrity," he said.

Kharel Jack, assistant secretary of Bounty Hall Baptist Church, where Babs was a member from March 31, 1972, until death, spoke of Bab's service to the church.

"She was president of the youth fellowship, she was Sunday school teacher and superintendent, treasurer and deacon. She was a very outspoken Christian who did not beat around the bush. Babs spoke her mind and sometimes I had my private vex when she spoke to me. As treasurer, when it came time for reporting, if she couldn't account for two dollars, she would worry," Jack said.

Babs married to Dennis 'Ansel' Spence, whom she met while performing the duty of a scorer at cricket matches. The union produced two daughters.

Dennis said of the woman he married in 1998: "She was my life, my everything. She cared for me in a very unselfish way during my illness. Babs loved her children and grandchildren. I will always remember her ability to budget. She made money work for us."

Daughter Tenille told WESTERN STAR: "My mother was my motivator, and a great-grand mother to my child. She prepared me for life and I will live my life remembering the good things she taught me."

In his sermon, Reverend Devere Nugent likened Babs to the biblical character, Job.

"Like Job, she knew how to trust God. When I was concerned about where the money was going to come from to fix the roof on the church, she would say, 'Pastor, trust God, He will find a way.' She has taken leave from here, but I know St Peter is preparing an area for her to serve up there."

Her body was buried in the family plot in Bounty Hall.