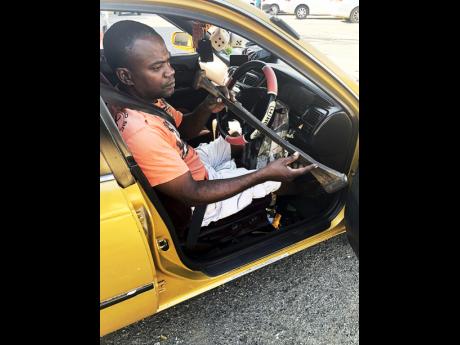 Linton 'Stick Man' Mitchell shows off the stick he uses to drive. 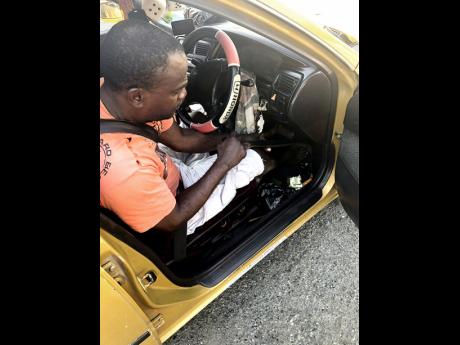 Linton Mitchell demonstrates how he drives with the stick.
1
2

Linton ‘Stick Man’ Mitchell is not your ordinary taxi operator. Although he has been living with a disability for the past 10 years, his drive to earn a living can be seen as an inspiration to many.

For years Mitchell has been driving his unregistered cab using a stick, as opposed to his legs. He said he became paralysed when he was held up and shot by gunmen in 2008.

Although his operation as a robot driver may not be legal, he told THE STAR that his eyes are set on one day becoming a registered cab driver.

“I’m disabled, but I don’t lose my feet. I still have them. They just don’t function, so I use a stick to operate my vehicle. I am a taxi driver, and having a red plate would be a dream of mine. Transport Authority offer me red plate, but the year car that I have, they say I need something over 2005,” he told THE STAR, noting that he currently drives a 2004 Toyota Corolla.

He explained that based on his expenses, he is unable to purchase a more current vehicle.

Still, Mitchell said that he is grateful for the leniency shown to him by the authorities, who from time to time check if his documents are up-to-date.

“Transport [Authority] draw down on me and run through my documents. They are good people. They look at my disability and see how I operate and encourage me to get legal. Dem see me in the street a try and don’t break me down. Dem say yuh have man weh stronger than me out here a give worries,” he said.

With 27 years behind the wheel, he stressed that he is good at his job.

"I am a professional at what I do, and my passengers can tell you, I do my work well. From Town (downtown Kingston) to Papine, Town to Barbican, when you come in my car, I tell them good morning, good evening and thanks when they use my cab. It’s the simple things they like,” Mitchell told THE STAR.

And while, his life isn't perfect, Mitchell said that he is happy to earn an honest bread.

“Me haffi try harder than a man weh have legs to try an achieve something. After I was shot, I spent six months in bed, being taken care of, then a next year and a half staying in the yard. God help me that me can go inna mi ride and take care of myself,” he said.