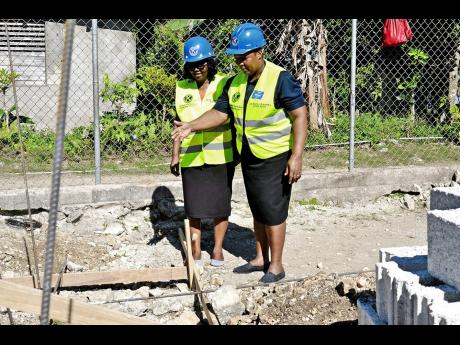 Lieutenant Governor, Kiwanis International Division 24, Donna Coombs (right), explains something to principal of Breadnut Hill Primary, Sheron Minott, at the construction site of a security booth at the school.

Kiwanis International Division 24, which consist of 11 clubs spread across the parishes of St Ann, St Mary and Portland, is to spend J$800,000 to construct security booths at four primary schools in those parishes.

The first booth is currently under construction at Breadnut Hill Primary School in St Ann, with others to be constructed at Trinity Primary in St Mary, one in Portland at a school to be decided, and another in St Ann.

Donna Coombs, lieutenant governor for the club, said that the booths are the main projects of her tenure.

"I decided on this project because it's the safety of the children we are concerned about. So that's my priority right now, because Kiwanis' mandate is 'Serving the Children of the World'," Coombs said.

"The cost is $800,000 for the four, that does not include labour. Most of the materials are donations from hardware stores, the roofing was donated by Vicbern Roofing Company in Manchester," she added.

The booths are to be built in separate quarters over the next year. About 25 Kiwanians, drawn from across the divisions, turned out for the first weekend of work.

Principal at Breadnut Hill Primary, Sheron Minott, said all 267 students on roll, the 12 teachers and ancillary workers were grateful for the gift.

"We are the proud recipients of the first security booth and we are really grateful that Kiwanis would have chosen to assist us with the security of our students," Minott said. "It is something we would have wanted to do, but we would not have had the funds to do it ourselves."

The school currently has a safety and security person whose employment at the school is totally funded by parents.

"This booth will greatly assist in enhancing his duties and function," Minott said.