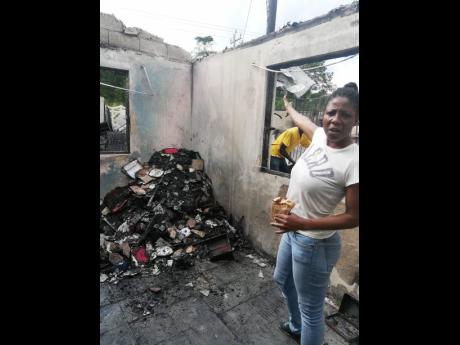 Petrice McKenzie points to the burnt out shell of her business place which was destroyed after a car ran off the road and exploded.

It was supposed to be a merry Christmas for Petrice McKenzie but it turned out to be anything but joyful. The businesswoman had closed the doors of her mini mart for the day and was chilling at her home when tragedy struck.

Never in her wildest dreams did she imagine that a vehicle would run off the road and crash into her establishment.

"I got up for about two seconds to go and turn down the music inside the mini mart and decided I was going to lay down. Before I could, I heard a loud bang and I just ran out through an exit and jumped over the wall... I don't know how I got over the wall but I did, and by that time the car exploded and everything was up in flames," McKenzie said.

She was relating an incident which took place on Christmas day. Two motor vehicles ran off the old Williamsfield main road in Manchester, leaving death and destruction in its wake.

Dwayne Patterson, who was driving one of the vehicles - a Honda Civic - died after he was trapped in the car that ran into McKenzie's business place.

According to police, around 2:30 p.m., Patterson was travelling in a yellow Honda Civic along the old Williamsfield man road near the Kirkvine plant at a high speed, heading on to the Kendal road. He lost control of the vehicle and it collided in the mini mart.

The driver of the other vehicle - a Toyota Corolla - lost control his vehicle which collided in a utility pole, causing it to break. The vehicle then crashed into an-eight apartment dwelling. The occupants of the vehicle were taken to hospital.

Despite watching in agony as her business place was burnt to the ground, McKenzie said it could have been worst.

"Everything in the mini mart gone... the appliances, the goods, everything is gone and just roughly estimating the loss, we would say about $35 million had been lost here... I have a gas tank near the mini mart and if that had blown, the 11-apartment house would be burnt to the ground along with other houses nearby. I am just thankful it didn't," she said.

With no idea of how she will begin to normalise her life, McKenzie said that she is hoping that things will work out for her.

"You had a lot of people who passed by and decided to video what was happening instead of helping and a water truck was nearby but they never thought to help but I am saying it could have been worst and I am just hoping we can put the pieces back together one day at a time. I have the support from community members and family and I know things will work out," she said