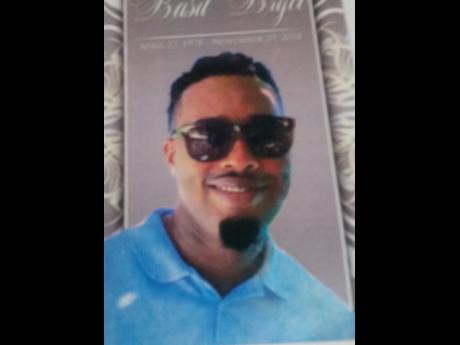 Basil Bryce, 40, was gunned down in Montego Bay, St James.

Basil Bryce who was laid to rest under the watchful eyes of scores of police officers in Daniel Town, Trelawny, on Saturday.

Bryce, 40, was gunned down in Montego Bay, St James on November 29, 2018. His funeral, which was held at the Beulah Baptist Church in Trelawny, was restricted to a one-hour service.

Deputy Superintendent of Police Winston Milton, head of the Trelawny Police, said his superiors gave orders that the funeral be conducted quickly. No reason was given for the decision.

Meanwhile, Leon Spence, retired principal of Daniel Town Primary where Bryce attended as a student, remembers him as "a mannerly and loving student who loved sports, especially football".

"He represented the school at football before he left for William Knibb High School. He was never going to pass his elders without saying hello," Bryce said.

In his sermon, the Reverend Owen Watson told the congregation that they should never forget the love of Jesus.

"Despite the circumstances of why we are here, no one can stop Jesus from caring. He is always within range of personal contact, always available," Watson said.

Bryce was buried in the Daniel Town Cemetery .