It must be obeah - Woman convinced dark forces crippling her brother 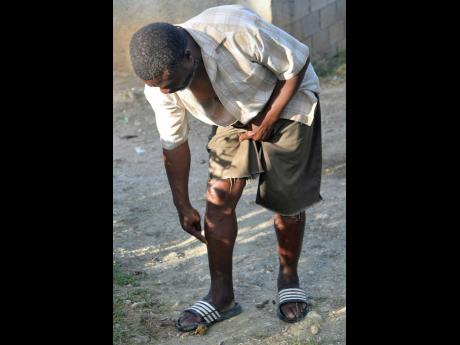 Patrick McKenzie points to the area of his swollen foot, believe to be inflicted by witchcraft 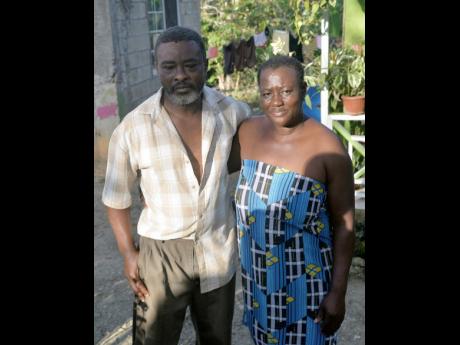 Persons who know Patrick McKenzie are adamant that the year-long mystery surrounding the constant swelling of his right foot is the work of witchcraft as doctors are unable to diagnose the illness.

McKenzie, the father of two girls, is a certified level five electrician, who, before his illness, had lived in the Mt Salem community of Montego Bay, before being forced to return to Copse in Hanover where he sought refuge with his sister and other family members.

He said his plight started sometime in January 2018, when he began to feel some level of discomfort in his right leg.

"Mi foot just start to hurt me all of a sudden and I have been to several doctors. They gave me 40 tablets to help reduce the swelling, but it still deh give me problems. The pain I'm feeling comes with a stinging effect," McKenzie said.

"The last doctor I went to ordered that I do a blood test, but when me check it out, it is costing some $30,000. But mi can't afford it, all now mi nuh do it," he told the WESTERN STAR. "A nuh little bit a money it costing me because it done mi account, mi money run our, the bank book dried up."

McKenzie said he is unable to work anymore because of the leg.

"I am trying to ensure that my 18-year-old daughter who lives with her mother is able to finish her tertiary education but it tuff," McKenzie said. "I have to be depending on her (his sister) for food and everything else that I need. I want to get back on my feet so badly, but the journey towards attaining that is painful and seems hopeless."

McKenzie's sister Clea-Ann Stephenson, a domestic worker, said while her brother does not believe in witchcraft, she and other persons in the community believe that his foot problem is a blow from the 'dark world'.

"Mi boil dandelion root and wild basil. It help him to carry down the swelling sometimes, but another time you look the foot swell up back. I can't tell you what caused that problem, I don't know what to say," Stephenson, told the WESTERN STAR.

According to her, her brother's untimely illness could have come from persons with whom he once worked, after he reportedly bragged about his academic qualifications which he attained through the Heat Trust/ NTA.

"Somebody had said he would like to carry him out (to an obeah man), but the man wants gas money. But me deh tell you the God almighty truth, only three days a week mi work (and) which part him fi go, him have to walk a part of the way, but him can't manage the walking," she said.

She said tests done by the doctor have come back normal.

"That fi show you say a must something them do him," she insisted.