Teenager wants to get certified as a boat captain 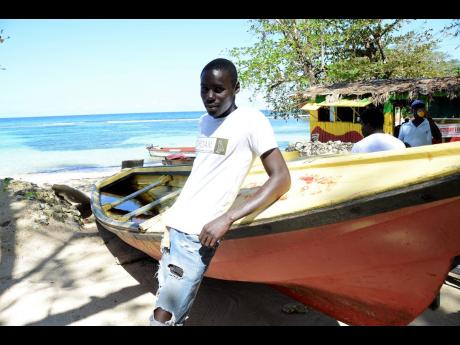 Romain Oldacre says he wants to get certified as a boat captain.

On any given day, one can find Romain Oldacre on Winnifred Beach in Fairy Hill, Portland, and last Friday was no different.

Although the teenager was helping his brother to make craft items for sale, his mind was elsewhere. He told THE STAR that he is longing to take his boat into the sea, but he said that his Eagle no longer glides on the water because it is in need of repair.

"The Eagle (boat) really belonged to my sister, but after realising that I had an interest in it, she gave it to me. But it is broken now, so I can't take it out anymore," he said.

At just 17 years old, Oldacre said that he has been playing the role of boat captain for years, and he has taken dozens of tourists to tiny offshore islets such as Blue Lagoon, Monkey Island, and San San Beach.

NEVER HAD AN ACCIDENT

"Mi nah go say me can swim like a fish 'cause people may take it the wrong way, but I know the seas very good. I have taught a lot of persons, how to swim, surf, and dive. Growing up in Fairy Hill, the sea was my playground, so it is fun for me to take the tourists on the sea. They always have a good time, and I never had an accident. I would just want to get certified and get my boat fixed so I can be back on the seas again," he said.

The teenager also told THE STAR that he would like to return to the classroom after disobedience resulted in him getting a string of suspensions.

"I used to go to Happy Grove High School, but after getting several suspensions, my parents decided that they weren't going to send me back. I can't blame them because I wasn't behaving. But I have learnt my lesson now. Life without a good education is sometimes means nothing," he said.

Until his boat is repaired, Oldacre said that he would continue to assist his brother, Rolando Brown, to weave baskets, hats, and other craft items.

"My brother loves what he does. This beach has helped my family to make money a lot. If you should go further down, you will see my sister at her little shop, and I am about the boat rides. I just cannot afford to send myself to school to get certified," he said.