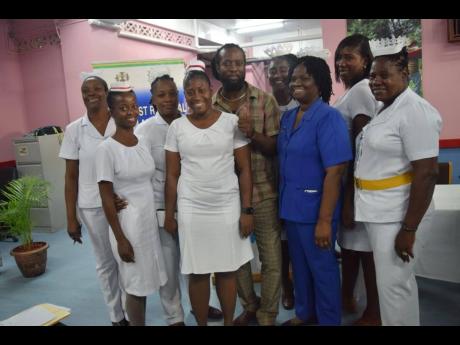 Prophecy shared lens with the CEO and staff at the Victoria Jubilee Hospital at the handing over ceremony on Friday.

At the handover ceremony held on the grounds of the hospital, the entertainer and his team provided the facility with five incubators, phototherapy lamps, two blood- pressure machines, and other small items.

“From what we were told, the medical staff at Jubilee delivers over 700 babies monthly, and some of them are premature, so one will see the need for incubators at the institution. We know that five incubators along with the other items, is just a drop in the bucket, but I am hoping that it will make a difference,” Prophecy said.

Since 2013, Rejuvenate Jamaica hospital has been dedicated to helping to improve conditions of healthcare institutions in Jamaica.

According to Prophecy, their contribution does not end at the VJH, he and his team will be making stops at other institutions later this year.

“Everyone knows I am a St Thomas man, and I was born at the Princess Margaret Hospital, and they, too, are in need of a lot of equipment especially an ultrasound machine, so we will be tending to that need also.

The health sector is in a crisis and we, as entertainers, have to do something to upgrade it. At the end of the day, we all have to use, or know someone who has to use, one of these facilities sometimes in our lives,” he said.

CEO of VJH Colleen Wright said she is extremely appreciative of the United Kingdom company for its contribution, stating that they had always had the interest of the local health ministry at heart.

“This is not the first time that they have offered their assistance. It is good to see how they have joined forces with the entertainment industry as well to help. When I was at Princess Margaret Hospital, I remember them donating US$11,000 worth of items to the facility, and to know that they have extended their kindness even further is a plus and we are really appreciative of it,” she says.