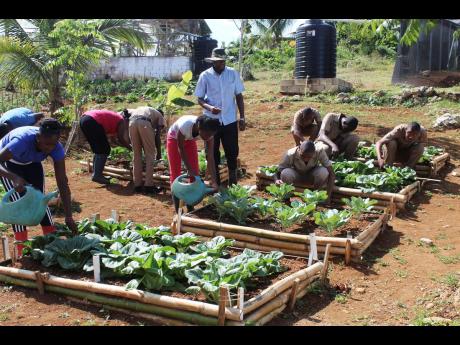 Aeon Stewart and his students tend to crops in a section of the school garden at Perth Town Academy.

Shawnavon Desouza, the principal of Perth Town Academy in Trelawny, believes that agriculture is a major driver of economic activity. This belief has influenced his approach to preparing his students for the outside world.

"The quality of the students I get made me decide to approach education at Perth Town Academy in a skills-based format. I am trained in agriculture, so I decided to use agriculture as a start," he told WESTERN STAR.

To start, Desouza had his agriculture teacher, Aeon Stewart, gives each of the 10 classes in the school an area for the cultivation of crops that would mature in a short time.

"In this way, students learn from the preparation of land to when the plant matures," Stewart said.

At Perth Town Academy, there is a poultry unit that can hold about 400 birds, a 50 x 30 greenhouse, and plastic drums to harvest rain water. Recycling is also part of the process, as the students make use of items like old tyres, bamboo and plastic bottles, while leaves are used for composting.

Based on the success of the venture, the school won the 4H School Garden Competition in 2017, and they hope to repeat that feat this year.

The principal also told WESTERN STAR that he had no problem selling the farm idea to the parents and Food For The Poor.

"Food for the Poor was only too happy to be involved. They built and outfitted the poultry unit, built the greenhouse and are pitting plans for a layer unit. From what we reap, the school canteen is subsidised and parents and staff members also purchase," he said.

To continue the skills-based approach, Desouza said that he has been in discussions with the relevant stakeholders to transform the principal's cottage into a business enterprise and offer training in areas similar to that which can be obtained at HEART Trust/NTA.

"Eventually, Perth Town Academy will have tutorial farms where students from other schools can come and learn bench terracing, contour, water harvesting, and drip irrigation," Desouza.