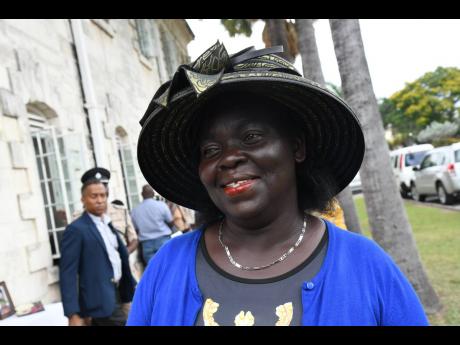 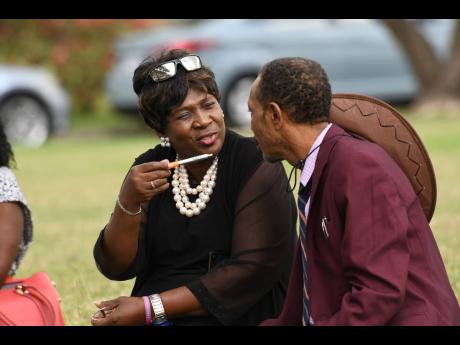 Marcia Frazer (left), seen here talking to another mourner at Dorraine Samuels’ funeral, goes to these ceremonies to meet people. 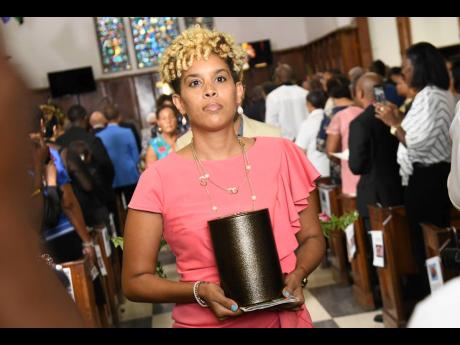 Melissa Rickards, the eldest of Dorraine Samuels’ three children, carries the urn bearing her remains at the broadcaster’s funeral held at the UWI Chapel Mona in Kingston yesterday. 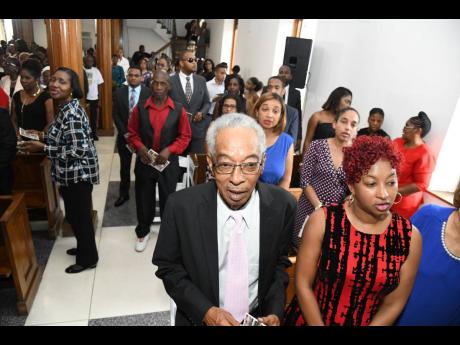 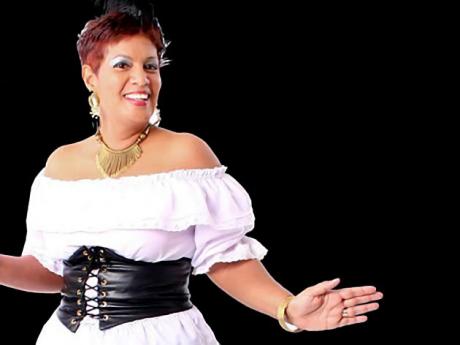 The celebration of the life of veteran broadcaster Dorraine Samuels at the University Chapel at the University of the West Indies, Mona, yesterday, brought together people from all walks of life who came to show their last respect to the woman whose voice captured the heart of all Jamaica.

It was a funeral that could not miss Doris Edwards, who told THE STAR that going to funerals is somewhat of a hobby for her. She said she left home in Kitson Town, St Catherine at 6 a.m., and took three different taxis to make it for the 10 a.m. funeral.

“I’m a lover of funerals, I go to a funeral almost every week. This one could not miss me for anything,” she said.

But Edwards said this funeral was different from the ones she usually attends, as after years of listening to Dorraine on the radio, and watching her on the TV, she felt attached.

“I’m basically 50 years old and from mi young mi know her. I listen to her in the morning and watch her on TV on the night; whenever she seh ‘Over to Archie on the smart board’, that always make me laugh. I’m gonna miss her. News without her is no longer the same. I just miss her,” she said.

Marcia Frazer travelled from Mannings Hill district for the funeral, and said she came to offer support to the family, but also to meet new people.

“I had to skip work today to be here, because dem nah guh give mi the time. It’s not even about knowing the people that die, it’s about supporting the living families. The last funeral mi went to was Alan Magnus wife (Kerry, who was buried last week), where mi meet Ralston McKenzie. I had never seen him before, I only hear him on the radio. It was so special because when I couldn’t find my family, I went on his show, and a suh I get to meet most of my family members, “ she said.

But like Edwards, who she met at the funeral, this one was special. She said that Dorraine and her programmes were an integral part of her routines.

“From I was small I listening to Dorraine on the radio, and she doh get nuh older, you could tell she was a nice person. Mi use her to time mi when mi a duh mi chores and things. Suh mi couldn’t miss her funeral,” she said.

Dorraine Samuels lost her battle to cancer. She died on March 26.

Her 38 years in media saw her delivering the news on RJR 94 FM on weekday mornings before serving up warm motivation on her magazine programme ‘Dorraine’s Coffee Break’. She was also co-anchor on Television Jamaica’s Prime Time News. Previously, she co-hosted ‘Good Morning Jamaica’ with her long-time colleague Alan Magnus, until his retirement.