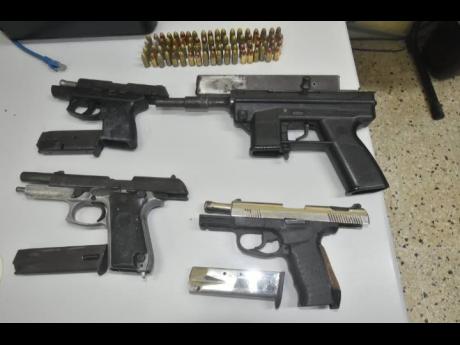 Four illegal firearms and more 70 rounds of ammunition were seized on the Eastern weekend at a grave-digging site in the Santoy community in Hanover.

The cops seized a Taurus 9mm semi-automatic pistol, one mini Taurus 9mm pistol, one Smith and Wesson 9mm pistol and an Intratec sub-machine gun. The guns were seized alongside 76 rounds of ammunition.

"I must commend the team that found the weapons. It is a job well done," said Detective Inspector Carl Brown, the crime officer for the western parish. "This is the first major gun seizure in the parish this year so we are really pleased about it."

According to the police, shortly after 1 p.m. on Sunday, a police patrol that was on duty in the Green Island area stopped at a grave-digging site at the Santoy cemetery, which is located along the Church Hill Road in Santoy district. The police said they observed that some of the men, who were at the grave site, were acting strangely, which arose their suspicion. The men were first searched and then the general area around the cemetery searched. During the second search, the four guns and the ammunition were found hidden in bushes in a section of the cemetery.

According to Superintendent Sharon Beeput, the commanding officer for Hanover, the patrol in question was one of several units that were deployed with special instructions to monitor social gathering over the holiday weekend.

"With several social events scheduled to take place on the Easter holiday period, the operation was part of plans to ensure the safety and security of residents and visitors," said Beeput. "While nobody was arrested, we are nonetheless happy these weapons are off the streets."