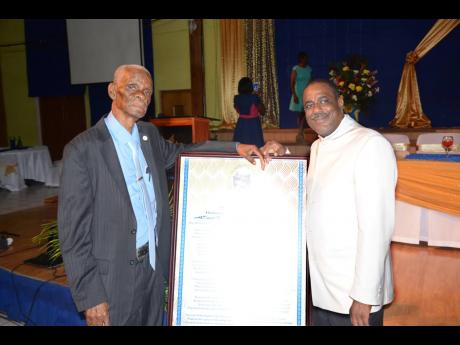 Alberga Foster (left) with Pastor Trevor Reid of the Orange Circuit of Seventh-day Adventist Churches in the West Jamaica Conference posing together with a citation that was given to Foster during a function held in his honour at the WJC Auditorium on May 5.

The West Jamaica Conference of Seventh-day Adventists (WJC) recently paid tribute and honour to one of its longstanding evangelists, 86-year-old Alberga Foster, in an appreciation ceremony on Sunday for his 60 years of ministry in the church.

Foster, who has been a familiar fixture in the Little Ease Seventh-day Adventist (SDA) congregation since his baptism in 1959, was the guest of honour at a dinner hosted at the WJC auditorium in Mt Salem in Montego Bay.

The function, which, appropriately enough, was held on Foster's birthday, was attended by representatives from the WJC, the Jamaica Union of SDA Churches, and the various congregations in the Orange SDA circuit of which the Little Ease Church is a member.

During the service, Foster accepted the churches' combined gesture with the humility for which he is known among his brethren.

"I want to say thanks to the Little Ease SDA Church and to the district on a whole for your kind gesture. I accept it with humility and singleness of heart," said Foster. "I want to give God the praise for making me the person He has made me into."

Foster's years of service include 32 years as one of the Little Ease Church's leaders and board members, a leader of the Adelphi Church, a builder of the Dumfries Church in the same circuit, and a preacher at several crusades, including in Costa Rica and Grand Cayman.

Trevor Reid, pastor of the Orange circuit of churches, praised Foster's six decades of service and dedication to his fellow church members and others to whom he has ministered in the wider society.

"For 60 years, Brother Foster has been in the church giving service, and for 60 years he's been serving his God. He has not been giving lip service, but he loves his church and the people of his church," said Reid. "He has given dedicated service to the WJC, and more so to the Little Ease SDA Church."