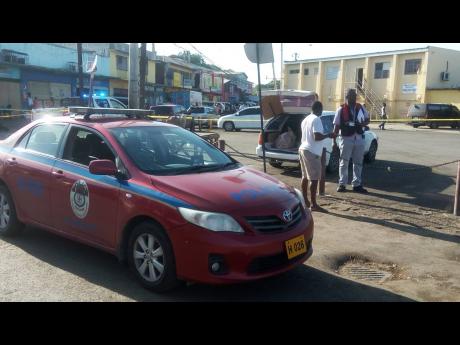 A joint police/military team on the scene at the Charles Gordon Market in Montego Bay, St James, where two armed gunmen attacked a male vendor yesterday morning, and shot him multiple times.

One man was shot and killed in Dumfries, St James, on Monday night, while a male vendor was shot and injured on Tuesday morning, after gunmen launched a brazen daylight attack at the Charles Gordon Market in Montego Bay.

Reports by the police are that in the first incident, the deceased, 23-year-old Jenardo Buckley, labourer of Dumfries district, was last seen alive about 11 p.m. on Monday, after he accompanied one of his sisters home.

About 6 a.m. yesterday, residents stumbled upon Buckley's body, which was seen in a crouched position in an abandoned shop with multiple gunshot wounds.

"What else mi caa seh? is only God save mi," one out-of-breath vendor told the STAR. "It look like the shooting start from dung a the train line, because wi hear the heap a gunshot dem a fire. Next ting wi si one man a run a come, and two man back a him a fire pure shot."

The vendor added: "Di man fast like a Bolt. The two gunman dem fire round 20 shot affa the one man, and the way how the man fast, is like him a skip all a dem. Everybody haffe run, vendor run lef dem stall, people run lef dem basket, people run lef dem car, an people all drop dem money and run."

When the police arrived, the victim was seen at the entrance to the market place, suffering from gunshot wounds.

According to the police, the incident occured while he was at a section of the market, known as 'Train Line'.

He was approached by two armed men, who chased him, firing at random. On reaching the vicinity to the market entrance, the gunmen caught up to him, and shot him multiple times.

Two motor vehicles were damaged by the bullets.

"That's why mi haffe believe inna mi God," the driver of one of the damaged vehicles told THE STAR. "Mi just start tek out some goods outa mi car wen mi hear the gunshot dem. Next ting mi see a the man dem a chase the other man, and a pure gunshot a fire round mi. Mi haffe run lef mi car and tek weh miself."

Immediately following the shooting, a large joint police/military team was deployed in and around the market place, and a number of vendors and shoppers expressed their concern at the lack of security at the Charles Gordon market place.

Sixty persons have been murdered in St James since the start of the year, compared to 43 at this exact period last year.