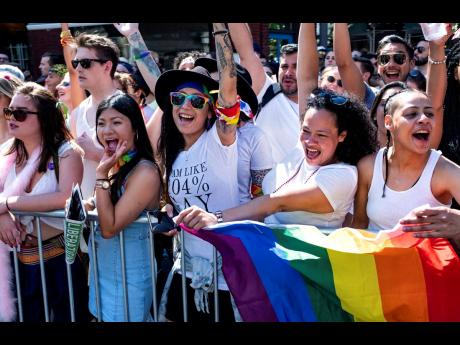 One killed, four injured in crash

One man is dead and four persons have been hospitalised following a vehicular collision on the Lilliput main road in St James early yesterday morning.

Reports from the Barrett Town police are that about 2 a.m., Sherman was driving a Toyota Yaris motor car with three female passengers when he collided with a Toyota Axio motor car.

The police were summoned and Sherman, along with the female passengers, and the male driver of the Toyota Axio, were all taken to hospital.

Sherman was pronounced dead and the others admitted in serious condition.

Seven Jamaican manufacturers and suppliers of food, personal care and irrigation products are part of a trade mission to the Republic of Trinidad and Tobago, aimed at increasing exports to regional markets.

The engagement, to be led by executives of Jamaica Promotions Corporation (JAMPRO) and the Jamaica Manufacturers and Exporters Association (JMEA), takes place starting today until July 4 and will see local suppliers engaging Trinidadian stakeholders and producers.

Manager for JAMPRO’s Agribusiness Department, Marlene Porter, said that the mission is intended to generate trade leads and present the opportunity for Jamaican entities to better understand the Trinidadian market and forgerelationships with stakeholders there.

More than $3 million in cash and prizes were awarded to the top performers in the 2019 Petroleum Corporation of Jamaica (PCJ) Schools Energy Programme Competition.

Approximately 90 students, aged six to 19, from primary and high schools islandwide participated in this year’s renewal, which was held under the theme - ‘Using Natural Resources to Generate Renewable Energy at Your School’.

The students were asked to, among things,build a solar cooker that utilizes sunlightforenergy.

The competition culminated with an awards ceremony at the Jamaica Pegasus Hotel in New Kingston last Friday, which saw students of Cornwall College in Montego Bay, St James, topping the entrants.

Cornwall College will also receive technical support from the PCJ to execute an energy efficiency and conservation project at the school.

A 17-year-old of a Clarendon address is now in police custody after he allegedly attempted to extort a medical officer in St Catherine on Thursday, June 27.

Reports from the Four Paths police are that about 10:49 a.m., the teen sent a message to the St Catherine-based doctor demanding a sum of money and making threats for non-compliance towards the demand.

The police were alerted and a digital forensic analysis was done which implicated the teen. He was subsequenly arrested and charged with demanding money with menace.

He is to appear in the Clarendon Parish Court on Friday, July 5.