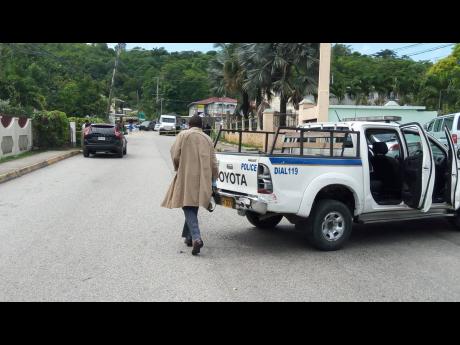 Members of the Area One Scene Of Crime Unit, at the scene in Anchovy, St James, where one man was shot and killed, and a male bus passenger shot and injured yesterday morning.

A man who had just purchased Cash Pot and Super Lotto tickets at a Supreme Ventures outlet in Anchovy, St James, was shot and killed by gunmen immediately after leaving the shop yesterday morning.

Dead is 25-year-old Stevaughn Wynter, labourer of Anchovy Meadows. Another man, who was a passenger in a Toyota Noah bus, was also shot and injured by a stray bullet.

"Mi caa believe seh a the man dem really kill him. Me and the man jus si dung a the Cash Pot shop a talk, and mi see wen him buy some numba, and him even buy a Supa lotto ticket," a community member told THE STAR. "Mi and him a talk a while, and him even did a play wid a girl inna the shop, until him lef. Next thing mi hear a pure gunshot, and mi see people a run all ova the place, so mi don't even bother look a wha happen, mi jus run too."

The man said that it was after things cooled down that he realised that Wynter had been shot.

He said that to his knowledge, Wynter was not a bad person.

"The shotta dem a move a way mi boss. Seet deh, dem even shoot a innocent man in a bus. And mi hear seh the bredda did a walk wid another youth wen him lef the shop, but the youth who him did a walk wid him teck foot wen the shooting start," he said.

Reports by the police are that about 8:45 a.m., Wynter had just left the outlet, and was walking along a section of the main road when he was ambushed by two armed men.

The gunmen opened fire hitting Whynter more than eight times to his upper body, before making their escape in a waiting motor car.

One policeman told THE STAR that murders within the parish during a state of public emergency are unacceptable.

"We have seen where the murders are climbing over the past weeks, and these gunmen have transitioned from committing these acts during the night, into the daylight," the cop said. "These gunmen are so brazen that they attack residents in broad daylight, along a public roadway, just metres from the Anchovy Police Station."