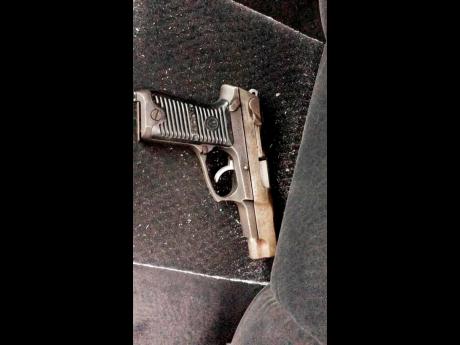 The Ruger pistol which was reportedly taken from one of the men. 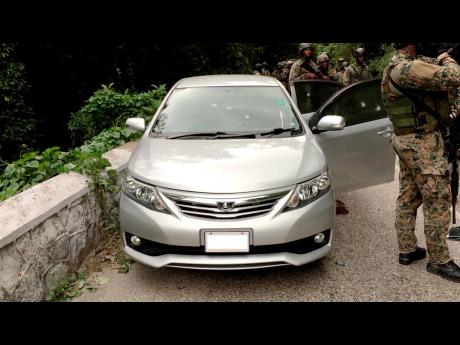 The Toyota motor car in which the men were travelling.
1
2

A man who the police say was on top of the list of most wanted men in Westmoreland was shot and killed, and another man shot and injured, during a military operation carried out in St James yesterday afternoon.

The dead man has been identified as Dushane Allen, otherwise called 'Dasheen', who frequents Bethel Town in Westmoreland, while the injured man is said to be a 25-year-old of a Montego Bay address.

Reports are that members of the Jamaica Defence Force, acting on intelligence, locked down sections of various communities, including Spring Gardens, Belmont, King Gate and Tower Hill.

The soldiers, who were armed with special equipment, and with Jamaica Defence Force search helicopters providing air support, carried out various searches in the area, and locked down sections of the roadways resulting in traffic pile-ups.

About 4:30 p.m., they intercepted a Toyota Allion motor car along a section of the King Gate main road, with two men travelling on board.

Shots were fired at the soldiers, and during an exchange of gunfire, Allen and the other man was shot.

Both were transported to the Cornwall Regional Hospital, where Allen was pronounced dead, and the other man admitted in serious condition. A Ruger 9mm pistol containing nine live rounds was taken from the vehicle.

Following the shooting, a team from the Independent Commission of Investigations visited the scene, and are now carrying out investigations.