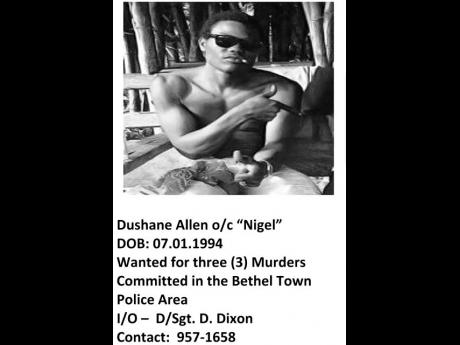 Several residents living within the community of Bethel Town in Westmoreland on Monday expressed joy over hearing that the parish's most wanted man, Dushane Allen, was killed by members of the security forces in St James on Sunday.

"Bethel Town will now be happy with the death of Dushane Allen," he said.

"He has been wanted by the Westmoreland police for quite some time, and he was a person that we had wanted for murders and shootings, and we have been investigating him for other offences," he said. "This person has been in the Bethel Town area, from which he hails, and he was very fearless. A lot of persons in the community were fearful of him, and I am sure that they are pleased, based on what had happened."

The residents say Bethel Town has been plagued with gang warfare for some time now, as men from Galloway and Marl Road battle each other.

They say Allen was very deadly, but gave him credit for the death of another gang leader in the area.

Reports are that at about 4:30 p.m., members of the Jamaica Defence Force carried out an operation at King Gate in Anchovy, St James.

During the operation, the soldiers intercepted a Toyota Allion motor car with two men travelling on board.

They were greeted by gunfire, and when the fire was returned, Allen and another man were shot.

Both were taken to the Cornwall Regional Hospital, where Allen was pronounced dead, and the other man admitted in serious condition.