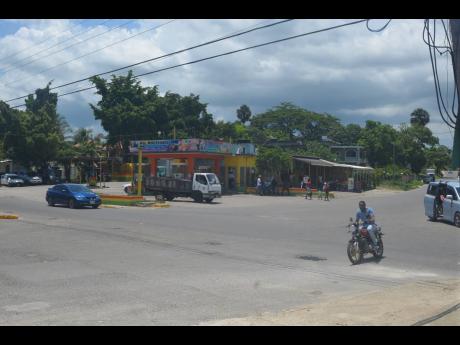 The Little London square in Westmoreland.

While the community of Little London in Westmoreland may appear to be a sleepy rural district at first glance, there are several issues that residents want to have addressed immediately, particularly poor garbage management and the lack of a stop light in the community square.

Eunice Green, a vegetable vendor who sells near the square, told WESTERN STAR that improper garbage disposal and collection have been recurring issues in the area. She also called for the reinstatement of the local market, which has been out of use for several years.

"We don't have any proper place to throw garbage. They used to have garbage thrown at the post office, and then they complained about rats there, so now we have nowhere to put garbage," said Green.

"Also, we want back the market, which has been gone from a long time now because they could never get much people to go in there. When I was a girl, the market was full, but now, it's not so," Green added.

"We want proper garbage disposal as the truck takes too long to pick it up. Little London also needs a whole lot of other things, like for instance, we want a good police station," said Davis.

Another resident, Hector Williams, said that a stop light was urgently needed in Little London's square as a woman had been hit down by a motorist in that vicinity just hours earlier.

"A car flew around the corner this morning and 'bounced' a woman down, and right now, she's in hospital. This is the biggest four-way in Westmoreland, so why don't we have a stop light here?" asked Williams.