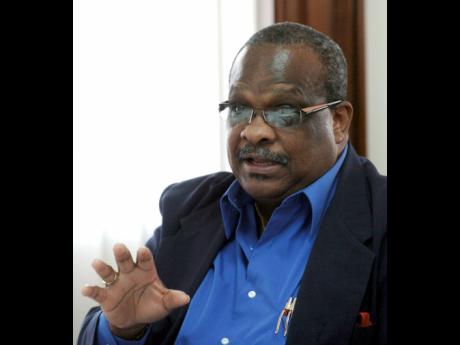 Former deputy speaker of the house Lloyd B Smith is counting his blessings after he was attacked and robbed at knifepoint by two men at a plaza on Constant Spring Road yesterday.

As they yanked his chain from his neck, Smith said he fought desperately to escape, to the point where his trousers fell to his ankles.

He stated that he was in the Corporate Area conducting business when he decided to stop by a pharmacy to purchase a birthday present for his daughter.

"I went in and made my purchases and was about to make a call on my Iphone when I realised it said 'no service' and I should contact my service provider. So I decided to walk over by the Digicel store nearby," he said.

Smith said he observed two 'suspicious looking' characters standing close by but thought he may have been overthinking, because the plaza was supposed to be equipped with security guards.

"It was about 3:30 in the afternoon so I was not thinking that something this barefaced could have happened in the area. I cautiously exited my vehicle and I walked away from them to go to the store. While my back was turned, they pounced on me and one of them held a knife to my throat and started to abuse me and said: 'Hey old man, give me what yuh have'," he said.

Smith told THE STAR that as he fought with the robbers and screamed for help, a few passers-by stopped to observe what was happening but none came to his assistance.

" I screamed and I shouted and the tussle got really physical because my glasses fell off. They tore off my clothes and my trousers and I was screaming for help and eventually this security guard who was inside the Digicel store saw what was happening and went for his waist. When the thieves saw that, they scampered off and ran towards Half-Way Tree," he said.

The thieves were not far from being successful as they only got away with the pendant from his chain.

"Thankfully, the lens of my glasses were shatter-proof so it wasn't damaged. My trousers fell to my ankle. My wallet and another phone were in my pocket and when they tore my clothes off and it fell to the ground, they apparently didn't have enough time to go down there and search it so they ran off and left it," he said.

Smith said that while counting his blessings, he is extremely concerned about the lack of security on the plaza.

"Criminal activities take place all over Jamaica but in this particular instance, this was broad daylight and I would have thought that the owners of the plaza would have placed the security mechanism to protect its users. I understand that a lot of senior citizens conduct business on this plaza. I am so shaken up. I have never had an experience like this in my entire life and I can tell you, I have been there," he said.

Smith said he did not report the matter to the police.