‘I want to walk again’ - Cabbie left crippled after removal of kidney, bladder and prostate 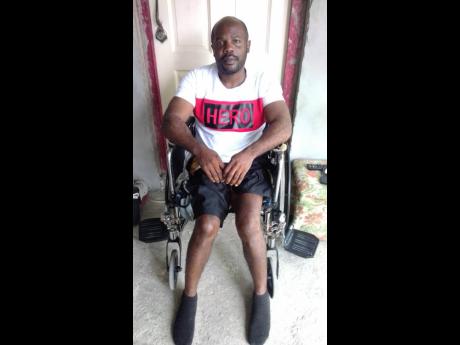 Forty-nine year-old George Grey, a popular taxi operator who resides in Porto Bello, Montego Bay, St James, is a frustrated and dejected man who wants nothing more than a chance to walk again.

He has spent the last two years in a wheelchair following a major surgery, which involved the removal of one of his kidneys, his bladder and his prostate.

The operation, he said, was done to remove cancer cells, even though he said the many scans that he took did not reveal the presence of cancer in his body.

"Because I was in so much pain and I passed blood for nearly one year straight, and I was feeling so uncomfortable and weak, I decide to let them remove what they say that is there, not thinking that after that was finished I would not be able to walk," Grey said.

Grey said that after his surgery, he started to feel different in his legs, and he inquired of the doctor what was taking place, but he could not give him an explanation. A week after the surgery he could not walk.

"Something is definitely wrong," he said. "To expect that I would not be able to walk, that was not in my thoughts at all," he said.

In addition to losing his ability to walk, Grey said that his livelihood took a major hit as a car, which he used to operate as a taxi, was repossessed by the bank.

He has lost his independence as he often has to pay people to lift him from the roadway to his house; and he has to be wearing a colostomy bag on his side.

Grey said that more than anything else, he would want his mobility back, and he is hoping that the advances in modern medicine might see him back on his feet.

"I need somebody to look at my case and try and see what can be done. I need to walk, and if there is a corrective surgery that can be done, I would appreciate that," he said.

Contacted by THE WEEKEND STAR, Public Defender Arlene Harrison Henry said her office could be of assistance to Grey.

"If he has a complaint that the hospital violated his constitutional rights, we would look at it for him to see if that is so. He should investigate the matter thoroughly, so that he knows exactly what occurred," she said. "Where there is an admission of liability from the hospital, one would have to refer him to an attorney-at-law. Where in the course of the investigation, material evidence comes forward that says the complaint is meritorious, then we could ask for compensation to be made to him. We can also advise and assist him in getting an attorney-at-law."