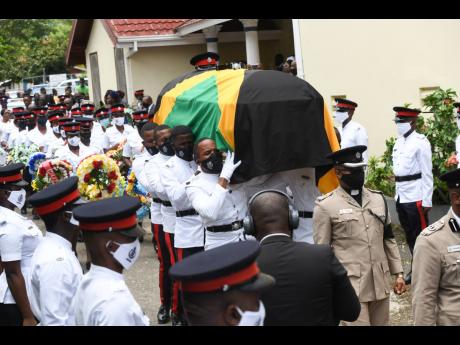 A bearer party carry the coffin with the remains of Decardo Hylton from the Bread of life Ministries in Linstead, St Catherine, on Saturday. 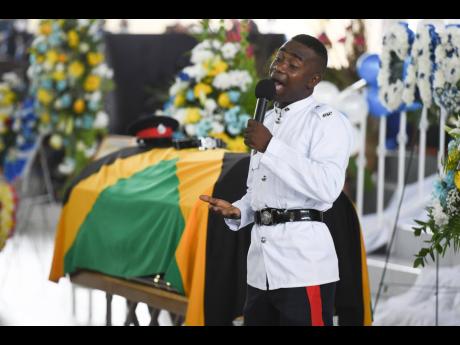 The late police constable Decardo Hylton, often referred to as Cardo by his friends in the community of Deeside in Linstead, St Catherine, where he grew up, was a man beloved by the entire community.

The outpouring of love was evident as hundreds of relatives and friends from his community attended the funeral held at the Bread of Life Ministries in Linstead on Saturday to mourn the loss of a young man who never forgot where he came from.

"I want everyone to know that Cardo was no ordinary person, he cared deeply for his friends," said his childhood friend Azzy Briggs. "Right now, we are still in denial."

Hylton was killed during a police operation in Horizon Park, Spanish Town, on June 12. He was a member of the Jamaica Constabulary Force (JCF) for four years, his death taking place on the anniversary of his enlistment.

Briggs, a fireman, told THE STAR that Hylton shared a special bond with his peers from the Deeside community in which he grew up.

"Even though he went to Ewarton Primary and some of us went to Linstead Primary, that didn't break the bond of friendship we shared when we were young boys. It is a friendship that continued even after he graduated from Dinthill (Technical High School) and later joined the force, and eventually up to his death.

"Cardo was easy-going and great when he socialised with his friends ... for some reason the girls always like him. When we go to parties, he was the life of the party, we couldn't go without him, and we wouldn't because we always enjoy ourselves when he is around," said Briggs.

Another childhood friend, who goes by the alias Mac 10, said Hylton would not be forgotten in the Deeside community.

"Cardo joined the police force because of his love for people and his friends," he said.

"The last memory he left me with was at the river bash when everyone had left and he walked over to me and said, 'Mac 10, I am here with you bro, I got your back'. Even though I knew him to be a caring person, I was touched by this gesture because he saw that everyone had left without giving me a hand to put stuff away, and he recognised the dangers of me being left by myself, being the promoter of the event, so he decided to stay behind to protect me."

Hylton's funeral was attended by Commissioner of Police Major General Antony Anderson, National Security Minister Horace Chang, Opposition Spokesman on National security Fitz Jackson, as well as rank-and-file members of the JCF. Hylton was 26 years of age. His body was laid to rest at the Commodore Cemetery in Linstead.