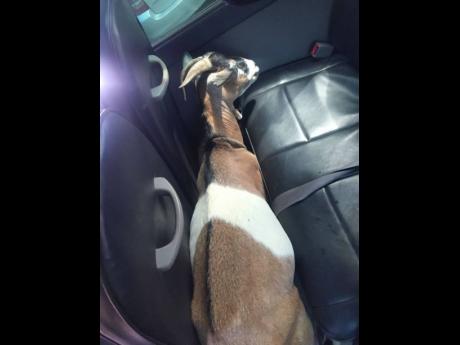 One of the eight goats recovered by St Thomas police on Tuesday. 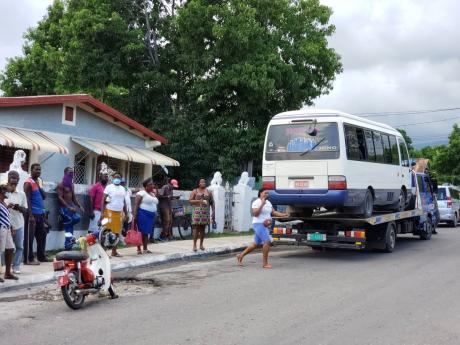 Onlookers peer at the bus in which eight goats were found by St Thomas police on Tuesday. 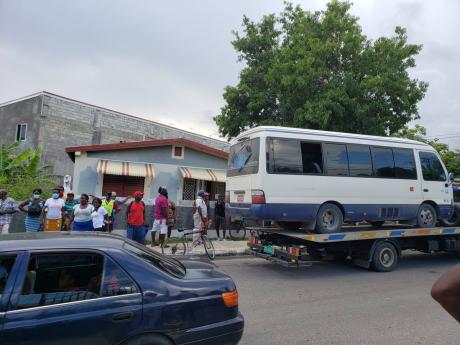 Onlookers peer at the bus in which eight goats were found by St Thomas police on Tuesday.
1
2
3

Two suspected goat thieves are in custody after they were nabbed with eight of the animals in a passenger bus at Catholic Lane in Yallahs, St Thomas, yesterday.

The lawmen said they received information about a theft in the Spring Garden area, involving a blue and white Coaster bus.

The vehicle was intercepted at 1:40 p.m., during which the animals were discovered, and the two men, both public transport operators, were held.

Another man who was in the bus reportedly ran and is being sought. Resident of Spring Garden, Michael Thompson, said he was sitting at his gate when the bus passed.

"Mi did a wonder to myself what that bus doing up here with them three ugly man yah, but mi never really a pay it any mind. It pass and gone until me see one of mi little nephew come and a seh dem a thief me brethren goat dem," he said. Thompson said that when the men realised that they had been spotted, they drove off.

Goats belonged to her father

"So we call police and them go on the trail and contact another unit and a so we get the phone call that dem catch the goat thief dem and we should come to Yallahs," he said. One of the persons viewing the confiscated bus outside the Yallahs Police Station was Vanessa Grant who said that three of the goats belonged to her father. She said that she heard the men were driving around, snatching goats from various communities.

"Have the goat them under A/C! Not even when me travelling with them mi nuh get A/C," she fumed. "This is not right. Dem need fi put a stop do these things. We cyah afford for these things fi gwaan right now because everybody have to be trying to gain off of what dem have in them home. We nuh have time to lose nothing right now."

She added, "A long time mi father have him goat dem a come with and it would look so bad if him lose them now but God good, we catch up on them."