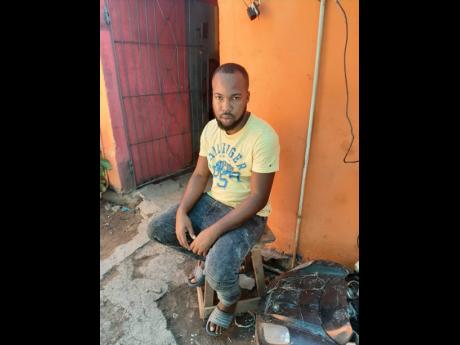 In July, 28-year-old Lance Bogues ran to his neighbour's burning house to save a two-year-old baby that was locked inside.

However the Ramsay Road, Maxfield Avenue resident lost his four-bedroom family home that held together every memory, asset and belonging he had.

While kicking off his neighbour's padlocked grille and bolted door for 30 minutes to get to the baby, the fire had spread to his house, leaving nothing behind but ash.

Five months later, as he looks forward to Christmas, Bogues and his family - his son, his mother and younger brothers - are still displaced. His mother has been staying with a friend in St Catherine, and he has been living in his friend's shop.

"I'm just trying to get everything back to normal. I'm rebuilding the house in the same spot, but it nuh finish yet. But me just a try do weh me can do same way. I don't think it will finish by Christmas, so we won't have somewhere for ourselves. But a just part of life. What nuh cost nuh life, nuh cost nuh harm. Me just look pon it dah way deh," Bogues told THE WEEKEND STAR.

He says it has been a challenging five months. In the blink of an eye, he went from having everything to being in total discomfort. But if presented with the same choice again - to help the child or try and save his belongings - Bogues said he would make the same.

"I can never regret that. No time at all. That is a life and it's a baby. And him have him whole life in front of him. These things are things I can always get back over time. Me make up my mind to move forward but it is challenging because me actually nah go spend Christmas with me son the way me woulda wish to. It's his first Christmas," he said.

His now one-year-old son is currently staying with his grandmother in St Catherine. Bogues' mother, Aretha Bryan, also has her younger children with her.

Meanwhile, Bogues hopes that someone would do the same for his family should the situation be reversed.

"I would want someone to do the same for me if I am in that situation and help out my child or my family. It wouldn't make sense for me to leave the baby and go try and save anything. That nuh make no sense," he said.