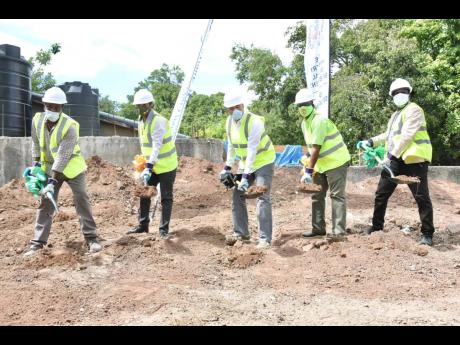 Prime Minister Andrew Holness (centre) is joined by Minister of Local Government and Rural Development, Desmond McKenzie (second right), as well as (from second left) councillor caretaker for the Molynes Gardens Division Glendon Salmon; Mayor of Kingston, Senator Councillor, Delroy Williams; and councillor for the Molynes Gardens Division, Patrick Roberts at the groundbreaking for the construction of the Andrews Mews Health and Recreational Centre, in Olympic Gardens, St Andrew on Friday. 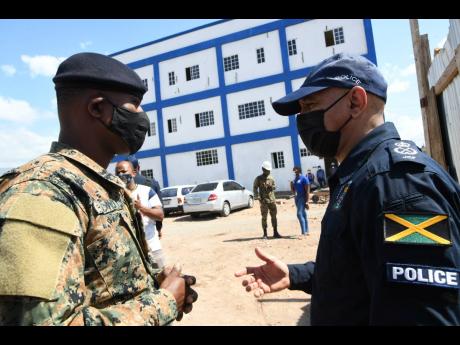 Major General Antony Anderson, the commissioner of police (right), has dialogue with Staff Sergeant Horace Powell of the Jamaica Defence Force during a tour of the new Olympic Gardens Police Station in the St Andrew West Central constituency on February 5.
1
2

West Central St Andrew, the constituency represented by Prime Minister Andrew Holness, is set to benefit from yet another multi-million dollar project.

Holness on Friday broke ground for a $16-million recreational centre, that has been dubbed the Andrews Mews Health and Recreational Centre. The facility will feature a walking/jogging trail for physical activity, a playground for children, and green space where residents can relax and socialise.

Construction of the facility is scheduled to be completed within eight to six weeks.

Holness said that the project forms part of ongoing plans to enhance and further develop the community. He said that the intention is to create an urban space, almost like a town centre, which is functional for the residents.

This will incorporate the infant school built in 2018, the community park, the health centre that the prime minister said is slated for repairs, and the Olympic Gardens Police Station, which is under construction.

West Central St Andrew is home to one of two infant schools built in Jamaica under a cooperation agreement with Jamaica and the Government of the People's Republic of China. The other school is situated in Eastern St Thomas.

Holness said that there are plans to build another infant school, as well a golden age home, which will be done through his Positive Jamaica Foundation. He said that another two parks will be built in the constituency, one more in the Olympic Gardens division and one in the Seivwright Gardens division.

"We are trying to identify the lands for them and we have some housing developments that are slated for this area as well," Holness said.