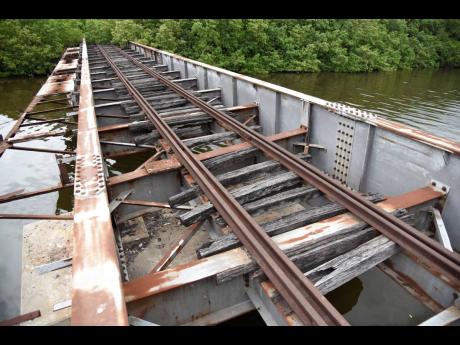 The troublesome section of the railway that runs through Seaview Gardens. 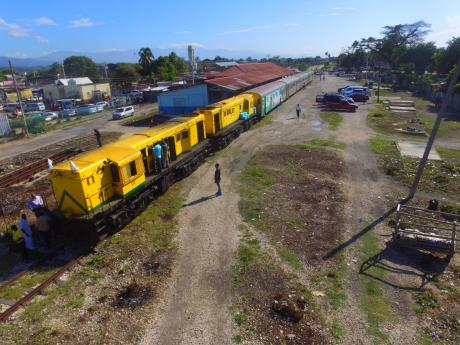 A Jamaica Railway Corporation train is seen at the Spanish town railway station.
1
2

The pitiful state of the bridge that goes across the Sandy Gully at Seaview Gardens in St Andrew is one of the greatest impediments to the resumption of the railway service between Kingston and Spanish Town in St Catherine.

Leisure trips are being planned for the railway service in Kingston - between downtown and Marcus Garvey Drive - as the Government looks to revitalise the service and give 'train riding' experience to Jamaicans.

Donald Hanson, general manager of the Jamaica Railway Corporation (JRC), told THE WEEKEND STAR that all is set for the school train to roll.

However, he said that major repairs to the infrastructure are needed before any locomotive can become operational across the Corporate Area.

"One of the biggest problems is the bridge across Sandy Gully," Hanson said, adding that, while there is need for some repairs on almost every train line in Kingston, it is minuscule compared to the work that is needed on the Sandy Gully bridge section.

Anthony Allen, an engineer with the JRC, said that the fixing of the bridge would be a major undertaking.

"It's major repairs because the foundation of the bridge is gone. So we literally have to re-pile the bridge and reconstruct the superstructure," Allen said. "Once we get the Sandy Gully bridge operational again, the rest is easy," Allen said.

Jamaica's railway service was closed in 1992, with incremental steps taken since then to bring back aspects of the service. The services reopened for a short period in April 2011, running along the Spanish Town to Linstead route.

"We have a challenge in terms of availability of staff because, you know, the railway has been closed for an extended period of time. Currently, we have a qualified driver but what we are trying to do is organise a programme of recruitment of staff, because that driver should have retired. So we have to have a succession plan in place to replace the aging staff," Hanson said.

A driver, guard and brakesmen are needed to operate a train. Allen says the JRC is currently in the process of getting retired personnel to train new people to take over the operations when the train is ready to roll again.

Hanson says it is the collective dream of both himself and Minister Montague to see the railway return to not just Kingston, but to other sections of the island.

"To have a train going through the Cockpit Country is a dream. The scenery alone just captures the mind," Allen said.