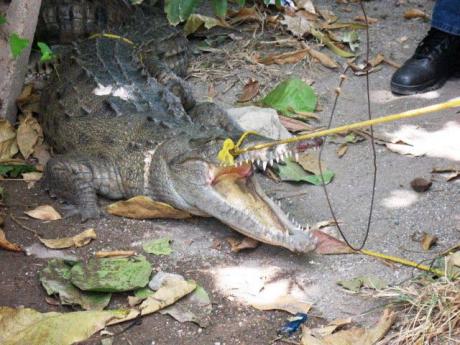 Corporate Communications and Public Education Manager at the National Environment and Planning Agency (NEPA), Ollyvia Anderson, says that there has been an increase in crocodile sightings over the past two months, which is a result of heavy rainfall associated with Tropical Storms Ida and Grace.

This follows the emergence of a video on social media in which a crocodile was seen walking along the Portmore Toll Road on Monday. Anderson told THE STAR that NEPA is aware of the video.

"During the afternoon, the agency received several reports. The assistance of the Urban Development Corporation (UDC) was sought to respond to this incident. When the UDC team arrived, the crocodile was no longer on site. Since then, we have not been able to determine whether the animal had made it safely back to the nearby wetland," Anderson said.

"During periods of heavy rainfall crocodiles follow floodwaters, expanding their range inland and can become displaced once the floodwaters recede. This can result in increased human-crocodile interactions," Anderson advised.

She urged the public to continue to report sightings of crocodiles to NEPA or the police, while reiterating that individuals who ignore the safety guidelines can be prosecuted.

"If a person encounters a crocodile they should keep a safe distance and contact NEPA and/or the police immediately. The public is encouraged not to provoke the animal as they are potentially dangerous and may become defensive. It must be noted that is an offence under the Wild Life Protection Act to possess, hunt, kill, capture or wilfully molest the crocodile," she said.