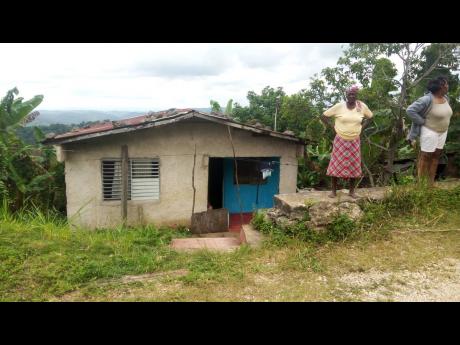 Angry residents of Allsides district, Trelawny, gather outside the home of 76-year-old Violet Walcott, retired farmer who was discovered chopped to death in her bed on Sunday night.

The gruesome killing of a 76-year-old farmer, Violet Walcott, of Allsides community, Trelawny, who was discovered chopped to death on Sunday night, has caused major unrest among residents.

On Monday, a group of angry residents were seen gathered outside Walcott's home, lashing out at her grandson, who was taken into custody by the police for questioning. The police reported that Walcott resides with her 26-year-old grandson. It is further reported that about 10:30 p.m., the grandson said he left his grandmother lying in bed and went to a neighbouring bar.

He returned to the house about 11:30 p.m. to discover her lying in a pool of blood, with multiple chop wounds to her head. The police were summoned. The scene was processed and Walcott was transported to the Falmouth Hospital where she was pronounced dead. Her grandson was also taken into custody for questioning.

The angry residents said that Walcott, who suffered a stroke several years ago, has been confined to her bed ever since. Kenneth Bailey said that up to a few years ago, he shared a common-law relationship with Walcott. He said she was always a hard-working woman, who spent most of her time on her farm and worked to build her own house.

"Up to now mi can't believe seh sumaddy really come kill a innocent woman, come chop har up inna har sleep," he said. Another grandson who gave his name as Jeffery Powell, said his younger brother came to his yard and told him about the gruesome discovery.

"At first mi neva believe him when him come tell mi that him find har dead inna bed, but after him sit dung and seh 'them a accuse mi seh mi bruck shop, and it look like a mi dem come fah, but dem neva find mi suh dem chop up mi gramma'. A that time mi start tek him serious," said Powell.

Since the start of the year, 13 persons have been murdered in Trelawny.