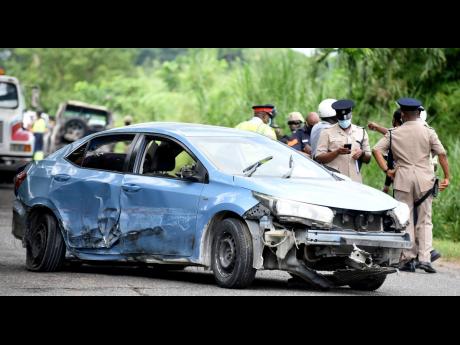 The motor car in which Kevin O. Smith and Constable Orlando Irons were travelling. 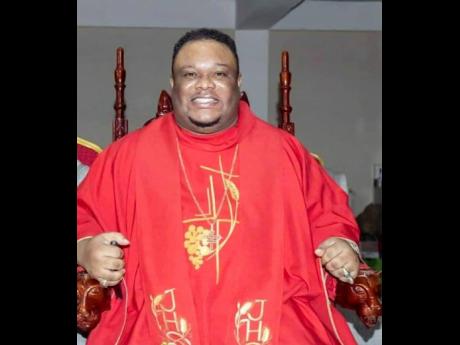 It would appear that, amid his ramblings and outlandish religious claims during an interview with the police in St James on Saturday, controversial pastor Kevin O. Smith, who died in a car accident in St Catherine yesterday, may have predicted his death.

According to a source familiar with the interview he did, Smith said that he would be taken away from those who were seeking to persecute him "sooner, rather than later".

The controversial clergyman was being transported to Kingston, more than 100 miles away from the Freeport Police Station in Montego Bay, St James, where he had been locked up since two persons were murdered in his church, allegedly at his instructions.

"The man said those who are seeking to persecute him will fail because he will be gone in the twinkling of an eye," the source said, admitting that the clergyman said a lot of things that one would not take seriously.

In the video leaked to social media, Smith described himself as, "I am that I am", which was a phrase used by Jesus as he identified Himself as God.

"Pharaoh tried to bring me down but I am that I am. All you people of the world, I came to you and you received me not," Smith said. "I am the fountain of life ...I have fulfilled all things," added the self-styled prophet.

The 39-year-old Smith, who lived lavishly in St James, summoned his congregation to his church on October 17. He ordered them to wear white and leave their phones at home -- wrapped in foil. His flock were told that they would be boarding the Ark. However, in a bizarre series of events, two members were murdered, apparently as part of a human sacrifice. A third was shot and killed in a shoot-out by cops who stormed the church to halt the blood-letting.

THE STAR understands that cops at the Freeport Police Station felt that their working environment suddenly became "heavy" after Smith was brought there.

"It is like this man bring a curse on the station ... prisoner disappear and no sight of a break-out, the place feels heavy like inside a morgue, and now a colleague come dead inna crash," one cop said.