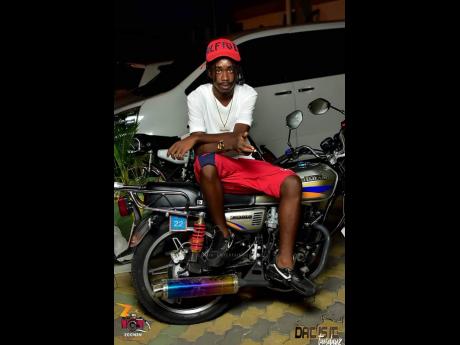 Popular dance move, 'New Dip', is now making waves on the local dance scene. Known for its simplicity and unique energy, Pata Skeng, its creator, told THE WEEKEND STAR that it reflects his own dancing style.

"My dancing style is very fun; it puts a smile on your face and brings a lot of happiness and unity," he said. Born Jermaine Brook, Pata Skeng moved to the community known as Jungle at an early age, where he adopted the dancehall dance culture spearheaded by dancehall icon Gerald 'Bogle' Levy. With a natural love for movement, rhythm and beats, the then 16-year-old decided to transform his passion into a career. "I used to dance with a group named Fearless, but I was always a solo dancer," he shared.

When it came time to create a moniker, he initially ran with 'Pata', a childhood nickname originating from his mother's first name, Pat. Then a friend completed the phrase by adding the 'Skeng'. Where his creativity is concerned, Pata Skeng's smooth movement is contagious. It allows others to learn his moves quickly. It is important that both women and men are involved in that vibing arena, so he bears that in mind when building dances. He describes the creation of New Dip as somewhat spontaneous.

"I was just home one day, heard a nice rhythm playing, found myself flowing with the moves and went around doing it and then people started to catch it," he said. New Dip, he believes, is receiving much love because it's easy but unusual at the same time. Recording artiste Ding Dong has jumped onboard to endorse the dance with a new track dedicated to the dance's innovation.

Other dance signatures to Pata Skeng's name include Patashake, which placed him on the dance map in the streets; Touch, single-handedly responsible for opening many doors for the young performer; Label; and Steph Curry.

"My fans can always expect great work and a lot of new moves. Look out for some new songs and tours as well," he said.