Naggo Head fire victims want out of the area 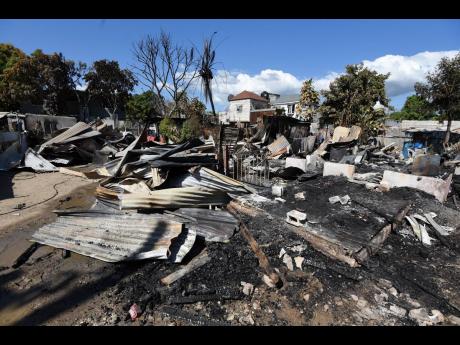 The remains of several board houses are all that’s left in this section of Naggo Head, known as Israel. 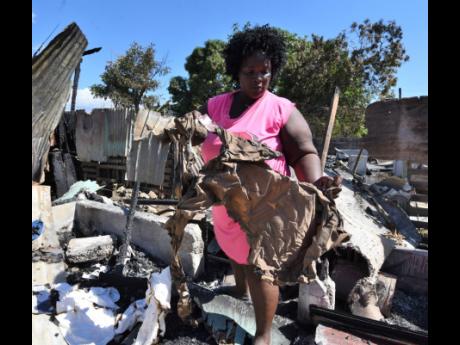 Georgia Samuels shows what is left of some of these school uniforms.
1
2

Members of three families who were victims of Monday night's fire that destroyed their homes in Naggo Head, Portmore, St Catherine, say they will not rebuild there due to ongoing violence.

The fire was allegedly started by arsonists. A fourth house that was unoccupied at the time was also set on fire early Thursday morning in what residents believe was a reprisal. Senior Deputy Divisional Superintendent Joshua Davis from the St Catherine Fire Brigade said the damage from Monday's fire was estimated at $17 million, while the cost of damage from Thursday's blaze, that destroyed a three-bedroom wooden structure, was put at $5 million.

"We are very fearful that even if we rebuild our houses here they will strike again. I really don't want to live in this area anymore," said Eugenie Coley, a dressmaker who has been living in the community for 35 years. "Right now I don't know how I am going to cope with this loss but I am trusting in God. I don't have anywhere to live but my church family has given me comfort."

Georgia Samuels, who lost her five-bedroom board house and a grocery shop, is even more emphatic about leaving.

"I don't want to live here anymore, I can't take the violence. The persons who are involved in the violence can move out as they wish before anything start and leave us trapped here," she said. Tracia Beale, a nurse, said she almost lost her two-year-old son in Monday's blaze.

'It was after the fire started and I didn't see him that I started shouting out where is my baby. Then I remember he was asleep on the bed with the clothes covering him. I quickly grabbed him and run through the door before the entire place caught fire," Beale recalled. Member of Parliament for South St Catherine, Fitz Jackson, describes the situation as unfortunate. There will be an assessment of what available space is there for displaced residents.

"This is what I will have to pursue with the municipality and the Ministry of Local Government. The fact that they don't want to stay in the neighbourhood, which is quite normal, make these discussions even more urgent," Jackson stated.